I'd wager some of you would have no problem calling my son Calvin a retard and, when I bristle, you’d tell me that I simply need to have a thicker skin.

That was my reply to a handful of folks who were grousing in a recent social media thread, as if aping the orange peroxide demagogue, Trump, about society being too politically correct.

One commenter, an elderly white woman, implied that I need to buck up as she has done in response to her cruel world. In pondering the unjust things that might have been slung her way, I imagined slurs and slights she has probably endured just for being a woman. Nevertheless, it appears she believes it is more commendable to tolerate offenses than lobby against them.

The thread had begun with a shared link to an online article describing the possible impeachment of two individuals in the student government of our local college over a recent fiesta, as it was described, one in which the mostly white partygoers had drunk tequila and had donned sombreros and fake mustaches in Mexican caricature. It was the third such affair involving the appropriation and misuse of the cultural identity of people of color and, though I can't say if hurt was intended, and while I have a morsel of doubt that it was, the truth is that some students felt offended, and this I lamented. The other commenters showed bitter contempt that political correctness had been taken too far.

Recently, I heard Trump regretting the fact that "nobody wants to hurt each other anymore." He waxed lyrical about the good old days of being able to rough up protesters, and whined about a nation that has become too PC. In my mind, political correctness is synonymous with politeness, courteousness and compassion. I mean, what is the downside of being thoughtful, respectful, sensitive and kind to others whose reality we can't truly know? Some might say taking political correctness to the extreme impinges on free speech. When it comes to inciting hatred toward certain marginalized groups—women, minorities, refugees, immigrants, the disabled—I disagree.

I noted in the thread that I’ve heard only white people complain about political correctness, citing that as evidence of white privilege, particularly of the straight male type: those in our nation who are most immune to bigotry, discrimination, oppression, prejudice and intolerance.

When one of the thread's white male commenters balked at the idea of white privilege, saying it was a load of crap, insisting that there is only one race, blaming people like me for separating the human race into categories of skin color, sexuality, sex, eye color, etc., and finally, following with the flabby platitude that all lives matter, I responded:

if there were truth to your assertion that there is only one race, how can you explain slavery and lynching and segregation? ... how do you explain the internment of innocent japanese americans? i understand the desire to live together in harmony as one race. i am all for it. but i cannot go so far as to deny that some people have it far worse than others in this world based on their race, and we cannot begin to solve those inequities until we acknowledge them rather than denying their existence.

At that point the man bowed out, saying he had better things to do like put on his sombrero.

The elderly white woman chimed in after having said that some people choose to live in racism, whatever that means. She typed:

God has made each of us different and given us each a row to hoe.

Rather than fighting a losing battle against what I saw as willful ignorance (one can only hope to change minds that are open and malleable), and though I understood her comment was not intended to refer to Calvin, I reasoned he could not be set apart, and thus I wrote:

i do not for one second believe in a god who would make calvin to suffer like he does ... if there is such a god, "He" is not merciful.

And while the conversation seemed to have been lost on deaf ears, it still feels right and fine to be a part of the greater good of us who value respect, consideration and kindness above childish impulses to express hatred, fear and contempt for that which we don't care to embrace or understand. 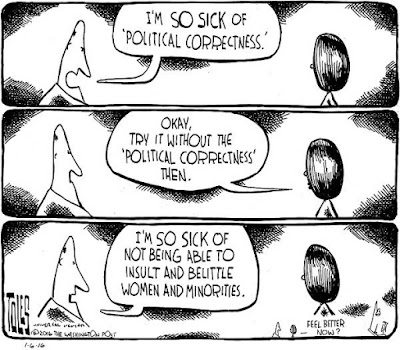 Posted by Christy Shake at 1:52 PM