Today I saw a six-minute film about emergency dispatchers. As I watched it, I remembered the first time, of what would become dozens of calls to 911, that Calvin had his first grand mal seizure when he was eighteen months old. I remember the fear and panic I felt not knowing if the seizure would stop. Ten-and-a-half years later, every time Calvin has a seizure, I sit by helplessly wondering the same thing.

It has been a rough thirty-six hours, starting yesterday morning well before dawn when Calvin woke up with ants in his pants seemingly needing to seize. I say the word need because, like an earthquake which releases the pressure of tectonic plates, after a grand mal seizure my boy’s brain seems to reset to its more serene state.

Dreading the seizure, I gave Calvin his benzodiazepine two hours early plus part of his morning dose of Keppra. By breakfast Calvin was stomping, screaming and finger snapping like mad, then spacey at times, so I gave him an extra half tablet of Keppra and sent him off to school, thinking my strategies would delay the seizure a day or so.

Still wearing my morning sweatpants, I put Nellie on the leash and trudged to the fields where I met Lauren and her dog. As we strolled we talked a bit about racism and white privilege, sexism and the presidential contest, then on our way home I got a call on my old Nokia cell, the phone reserved for urgent Calvin calls. He’d had a seizure at school.

Thankfully, it wasn’t a grand mal, but still, I rushed home, threw on some jeans, tied my dirty hair into a bun and raced off to retrieve my boy, his elementary school not five minutes from our home. As I entered the building, one of the secretaries noted my worry, so she fled to the door handing me a visitor's pass so that I didn’t have to stop.

Though I wanted to, I was conscious not to run down the hallway and instead was greeted by two small boys. One of them wondered why I was there; he recognized me from a visit I’d made to his class last fall to talk about Calvin and epilepsy.

“Calvin had a seizure,” I said, then asked him to remind me of his name.
“William,” he replied, and I remembered he'd told me his brother has epilepsy.

The other boy, a cute, chubby third-grader, responded with concern.

At home Calvin seemed to do slightly better after each round of medicine and cannabis oil. Even so, I couldn’t shake the feeling that we were in for more, especially considering his odd behavior and, at times, the spacey and pained expressions on his face.

Just after midnight this morning Calvin awoke agitated again. Fearing an imminent seizure, I gave him another half tablet of Keppra, and when he had a partial seizure at two o’clock I drew up a syringe of THCA cannabis oil, squirted it into his mouth and chased it with some juice. Eventually, he calmed down and slept with his arms around my neck until four a.m. when he again awoke in an inconsolable state. I managed to give him his benzodiazepine early, and while that helped, he never went back to sleep.

This morning, right before the bus arrived to take him to school he had a brief fitful attack. It wasn’t like any seizures I’ve seen. Unable to rule it out as having been one, and my gut saying it probably was, I popped yet another half tablet of Keppra in Calvin's mouth and sent him off to school; if this is going to be the new normal—and I'm not saying it is, but it does seem to be trending—as much as it makes me feel uncomfortable, I can't keep Calvin home every day he has a non-life-threatening event.

He’s at school now. His teacher and aid say he's being somewhat quiet yet insistent on putting his fingers in his mouth and slamming his forehead into his palms, which I’ve begun to sense are harbingers of an impending seizure, if not some kind of seizures themselves. Good news is it is day eight and so far we seem to have thwarted the punctual, now weekly, grand mal. Bad news is I know it is still to come, and when it does I'll be sitting by helplessly, wondering if it's going to stop, wondering if I'll have to call 911. 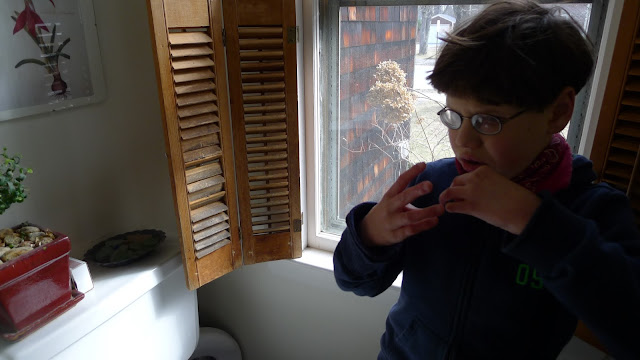