A miserable wind ekes its way through cracks in window frames and under doors. It was meant to be “warm” today, but at thirty-six degrees it has begun to snow. Most of what had dropped this season had already melted revealing dead grass, crumpled brown leaves and sidewalks strewn with sand and salt. Last week, purple crocus spears pushed their way through thawing mulch, the only color in a barren March world.

I sit at my desk on this gloomy day wondering what to write, and as I do my eyes wander to a photo that Michael gave me years ago, which sits in a corner window sill. In it, he and I relax in the sun near a favorite place called The Lookout, his head in my lap, our dog Jack at my side. Pregnant, I was in the initial weeks of my first trimester, and Michael fashioned a photogram of a single white dot symbolizing our unborn child, then set it adjacent to the shot of us three and encased it in a raw wooden frame.

The image of that single dot, that patch of light, had held so much hope, so much promise, and I’d ask myself: Will it be a boy or a girl? Will she be blond or he brunette? Next summer, will we be basking at the beach, our child playing with yellow buckets and plastic spades? What might his first word be?

Alas, life offers no guarantees. Our boy came six weeks early missing part of his brain and barely able to breathe, as if the reams of troubling medical reports, test results, endless worry and dread were pressing on his birdlike chest.

It was a day like today, twelve years ago, a month after Calvin's birth, that I was propped in the hospital bed holding him, gazing out a window into a forest veiled in snow, trying in vain, or so I thought, to get my son to nurse so we could finally take him home. He was so wee and frail. Michael held vigil while our dog Jack laid on his bed in the corner of our labor and delivery ward room. Outside, leaden skies leeched all color from the scene. Trees were black. Snow was white. Stones were ashen grey. My heart sunk wondering if we'd ever get to take Calvin away.

The days were long and lonely, the three of us being cut off from friends and family and home, living in an antiseptic room with a helpless child and no way of knowing the hardship that was in store. Winter seemed never-ending and I rarely left my boy's side except to venture out into its cold for a spell just to breathe and feel alive.

But as I look at this photo twelve years later, and think of my son who has come so far—walking and, though not talking, signing a few words, and able to recognize and love his parents and his home—I see the patch of light and in the glass a reflection of the outside world, and it makes me wonder again what promises it might hold. 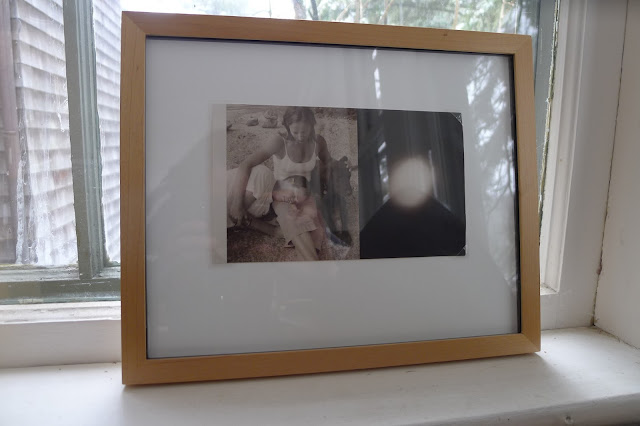 Posted by Christy Shake at 4:59 PM