Sometime after midnight the moon hung in a mist of melancholia, tangled in a fanned canopy of just-budding twigs. I wondered if it were an omen; I felt its gravity tug at my psyche as if it were a black hole, and I asked myself why, because it was only the morning of day five.

I remembered that last evening I’d described to Michael my nice day with Calvin, how we’d gone to the hardware store nursery and, once Calvin figured out it wasn’t Walmart, he willingly joined me in patting purple pansies, prickly juniper and spruce and plush sprigs of lavender heather. I mentioned how, later, Calvin had taken my hand as we walked the back way through the field to the deli to fetch a gallon of milk, and how after supper he had chosen to go to Woody’s for a piece of chocolate—something he’d never before done of his own volition. I’d said that maybe it was too good to be true.

After seeing the moon last night and just before dawn, I dreamt of Calvin’s cannabis flower and how I’d left a white paper bag of it in the car. The car got towed away making me fret that the bud would bake in the sun on a hot leather seat until it was ruined. I woke myself up in a worry, out of which Michael soothed me back to sleep.

Today, for hours as clouds rolled by in waves eclipsing the sun, Calvin seized: his skin flushed, his fingers surveyed his throat, he seemed out of reach, his mouth crept into grotesque sideways smiles, his body quaked like a temblor, though thankfully not a grand mal. Five fits he had. Extra Keppra had no effect. Extra cannabidiol proved just as useless. Extra THCA cannabis oil was the only thing that offered any reprieve from the partial seizures' sorry repeat.

Now, at eight and after dusk, I hear the train's melodious call. Perhaps it welcomes a good night's sleep like the fog horn of my dear Golden Gate. I hear the whistle recede in the distance as I do every night when the house is silent and still, like my boy in his bed upstairs, like the dear and dreaded moon rising up over the hill. 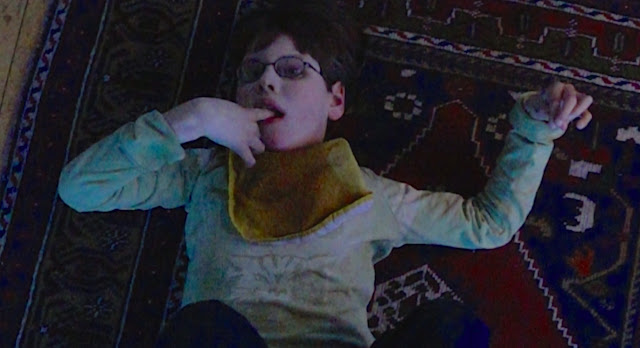 Posted by Christy Shake at 8:33 PM