Just before dawn as I slept in my boy’s embrace after an earlier grand mal, I dreamt of traffic jams, topless cars and failing brakes, of old flames neglecting my gaze and of girlfriends lost, of trolling icy bays of black and white and gray. The sky pressed down upon me, my loneliness naked and plain, and when I peered into an inky sea, an angry whale met my eye and set to fling me from my ship.

Perhaps this dream was a metaphor for life these past twelve years, especially since Calvin’s seizures first defined our world: their tendency to impede our every move, their habit to gather speed like runaway trains, epilepsy’s effect on our friendships, its nature to estrange, and the stress and dread of looming fits which shroud our every night and day.

Twins ... sigh. They share so much. Too much. Chase may have been named because she followed Charlotte out at birth, but she has absolutely been the leader, the caretaker, in charge. With her huge heart, she nurtured her sister through nine devastating years of seizures and all Dravet Syndrome brought to our lives.

Yesterday Chase had a seizure.

When I read her words I felt myself sinking into a murk, as if a huge stone were tethered to my feet. I pondered the unfortunate news.

What might this mean for Chase? Will she have more seizures or just the one? What would that mean for Charlotte? How will their family endure?

Then I thought of Paige. Some might call her Warrior, or Dragon Mom. I call her Pioneer. In Colorado several years ago, she was fighting to save her daughter's life from Dravet syndrome when, after Charlotte failed every available anticonvulsant drug and treatment, neurologists washed their hands and advised Paige to take her daughter home to die. Paige didn’t heed their call because she's fearless. Instead, she followed her gut, used her brains, checked her caution at the door and turned to cannabis, an herb that only one other American parent had openly given to his seizing child. Paige put herself on the front lines of using cannabis as medicine when the world was telling her, no.

Paige was instrumental in helping me blaze my own trail which, too, was on the cannabis-for-epilepsy frontier. She counseled me about benzodiazepine withdrawal (our children were on the same one), she directed me toward cannabis strains that might help fight my son's seizures at a time when few others were delving into the unknown. She has fought long and hard against a rigged system that maligns cannabis and would deny it as medicine for our kids, some of who are dying.

Shortly after my unsettling dream, I spoke with my friend Lauren and told her of Calvin's early morning grand mal, of how, in its aftermath, I'd given him a dose of CBD cannabis oil to see if it might stay a second seizure, and how it seemed to have done the job. I mentioned that I'd also given him his benzodiazepine two-and-a-half hours early followed by an extra Keppra upon waking for the day; All of these measures meant to derail any further seizures seemed successful at keeping them at bay.

Lauren praised my dogged efforts to eliminate as many of Calvin's seizures as I can. She told me she imagined me as the sharpshooter, Annie Oakley, conjuring up for me a western gal in leather boots and cowboy hat shredding her targets shot by shot. I remembered how I often describe epilepsy as a moving target, and so the image of a cowgirl in suede fringe, and seeing as how I'm a Westerner with a love of shit-kicking boots, seemed apt. I looked up Annie Oakley and found this description:

And so, in honor of Paige, and all the other formidable mothers spearheading cannabis as medicine for their suffering children, I want to send the powerful mental image, and all the mojo that goes with it, of the Pioneer and her weapons: one syringe of cannabis oil at a time, blowing epilepsy to smithereens. 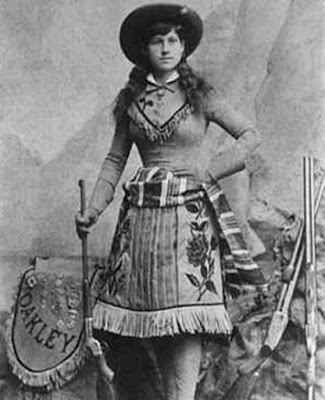 Posted by Christy Shake at 2:44 PM