dreams and hills and idyll roads

A recurring dream I used to have as a youth goes like this:

An infant sits alone and naked in a glen at the base of a bluff. Clouds roll like molten lava, cracks of silver light breaking through in waves. Everything is dark, has a twilight cast about it, though not like the hopeful dusks I’ve loved when warm light streams through windows, rather, with the foreboding of an eclipse. In my sleep I hear two disturbing sounds: one, the pulsing of orchestral drums, akin to thunder, throbbing like a giant’s heartbeat—mine?—the other, a tight pluck of a harp, discordant, sharp, queer. The butte is cloaked in a mossy tangle of black, green and gold, pools of miserable clay skulking in dark pockets. The fair child sits silently, as if abandoned, though not upset or crying, seemingly unaware that he is alone. A single hair sprouting from his head quivers with each pluck of the harp as the ground rumbles and quakes. At the summit of the mount looms a massive rock. Somehow, its balance upset, the stone begins to careen down the hillside, the pounding drums and fierce harp a sick accompaniment. The boulder collides with outcroppings rocketing shards of stone into space, then leaps and crashes into the next shelf, sending more. The ground trembles. The hair plucks. The boulder thunders down the jagged butte headed for the infant boy, and as the gigantic stone approaches, its looming shadow seems to linger before the rock engulfs the child’s oblivious form.

And I wake suddenly in a sweat.

Before Calvin was born, before he we knew he was a boy, I had a dream of a fair child with wild flaxen curls who had come into the world chatting away, his face close to mine like he is wont to do today. Since his seizures began, I often dream of his demise, of him trapped and seizing behind a couch, of me forgetting his seizure meds, of him choking or drowning within arm's reach. Sometimes, when I dream of him seizing, I wake up to that reality happening in the very next room.

My friend Lauren often dreams of Calvin, too. She dreams of him talking, perhaps even running and playing—all things he cannot do. She wrote to me yesterday morning:

I had a dream about Calvin last night. We were face to face and I looked into his eyes and they were cloudy, but he said to me as he grabbed my arms, "It's hard for me to go beyond a certain point."

If I were someone who studied dreams, I’d say his eyes were fogged because of anticonvulsant pharmaceutical drugs. I’d say Lauren dreamed those words because on Sunday she gave me a break and held Calvin's arm with Michael while we took a short walk down an unfamiliar road. Calvin balked and struggled against our will to lead him gently out of his comfort zone and into the larger world.

Calvin has never made strides—crawling, climbing stairs, walking distances, especially in unfamiliar places—without being pressed. For whatever reason—his brain's absent skein of white matter, the seizures, the years and scores of antiepileptic drugs, his newly detected anemia, the headaches, lethargy, dizziness, confusion—Calvin's development hasn’t advanced much past that of a babe in many ways. Like in my recurring dream, he sits so innocently, oblivious to the sometimes harsh world that surrounds him. He swims amid his brain's threatening electric storms. He's pummeled by drugs and drowns in their skulking pools. All these things impede his every move. But unlike in my dream, I'm beside him. I'm strong and able to take him by the hand, lead him up gentle hills, out into green and gleaming fields and down idyll roads where he could never have gone on his own. 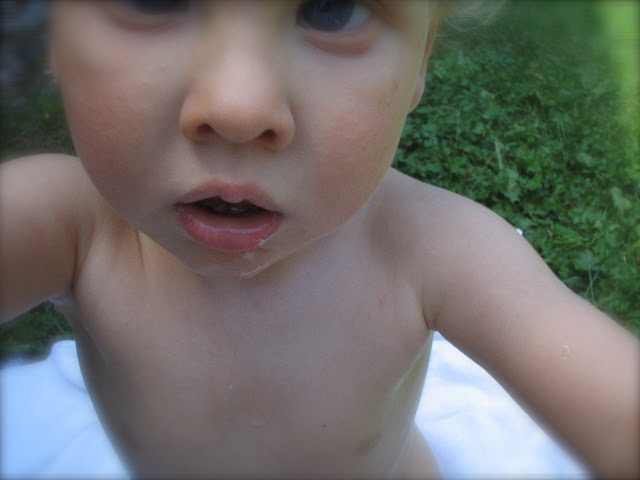 Posted by Christy Shake at 1:50 PM