It’s sunny and bright outside, the birds are chirping, shrubs are budding, flowers are pushing up. Nevertheless, my mood is dark as wet earth. This morning, Michael and I tried to walk with Calvin alongside the downtown shops, but every few steps our son balked, bending at the waist, seemingly inclined to sit. The “fresh” baguette we bought was stale. Nellie irksomely pulled at the end of her tether. Nearby children fussed and squalled, their parents gawking at Calvin while he drooled and stared at the sun.

"Why did I move to Maine?" I groused, complaining of the town's feng shui, unfairly comparing it with San Francisco.

San Francisco, where I lived for ten years, was warm and inviting, dotted with lovely vistas, pleasantly peopled in diverse ways, and pulsating with positive vibes. What's more, in San Francisco there was no Calvin.

I often return to the theme of freedom and of feeling as though I’ve got none now. Sure, when Calvin goes to school I have much of the day to myself to write or putter in the garden, to read or catch up a little on sleep, and to put the house in order. But never do I not worry about my boy or wonder if he’s fallen, if he’s had a seizure, if he’s choked on food at school. Always do I jump—heart racing—when my Calvin phone rings, fearing the worst has happened. And when Calvin comes home, I’m consigned to walking in circles in his wake, standing beside him while he bangs the bathroom shutters as he has the past ten years, or placing myself between him and any sliver of direct sunlight for which his eyes hunt with reckless compulsion.

My back is not free from lifting my nearly sixty-pound boy. I’ll likely never be released from changing his diapers, spoon feeding him, covering him at night, telling him not to bite his shoes, his kerchief, his sleeve, his books, the table, the carpet, the doors.

I’ll likely never enjoy the freedom of seeing Calvin run ahead—or toward me—or ride a bike or swim in a nearby pool. I'll likely always have to spot my son as he goes up and down the stairs. I doubt I'll ever be free to eat a relaxing family dinner without having to tend to my boy.

When—if—Calvin grows up, I’ll never feel the liberation and glee of seeing him off at the airport to visit his grandparents or attend college or travel the world.

I doubt I'll be free from worry over the next big seizure, or a spate of several within a day or more, or free from the burden of having a child who must take medication scores of times each day. I'll never get respite from the fret and fear of what might be hurting my sweet non-verbal boy.

These true freedoms don't come with a child like Calvin.

Thankfully, though, I managed to get outside today and visit a friend. I walked Nellie off the leash in sun dappled woods, delighted in the sounds of cheering students and of balls hitting bats square on. In spring air still hovering in the low fifties, college girls pranced by in frilly frocks and sandals, the boys in shorts and sneakers, celebrating an annual party weekend.

And as the sweet scent of hyacinth and pansies filled my nostrils, I closed my eyes, took a deep breath, and savored a moment that felt, at least a little bit, free. 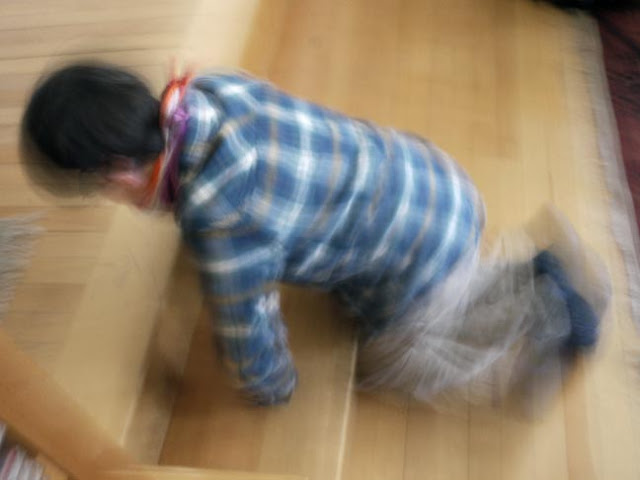 Posted by Christy Shake at 4:08 PM