There was very little that was merry about yesterday; our sweet boy endured a dozen or more partial seizures from dawn until well after dusk. I laid with him in his bed upstairs all day as he napped on and off, waking only to have the next seizure. At times he'd cry with a look on his face as if imploring me to make his hurt stop. I threw extra Keppra down him plus several doses of extra THCA cannabis oil but nothing seemed to stop the fits. There is little doubt in my mind that he was suffering at the hands of the benzodiazapine withdrawal, which I had reinstated three weeks ago.

Even so, I manged to get outside just after sunset to walk Nellie at the fields, which were shrouded in mist, while Michael stayed home with the kid. He'd spent much of the day doing the grocery shopping for two holiday meals and preparing our annual Christmas Eve dinner and dessert. Though we are not Christian, we enjoy celebrating some of the secular traditions of the holiday, namely the Kolster family bourbon eggnog.

After we put Calvin to bed and kissed him goodnight, I slipped out again with Nellie off-leash, treading on the icy sidewalks to see Woody, my octogenarian friend who lives three doors down. He let us in and, in usual form, offered me a bourbon on the rocks. I declined this time, then went into his den to pet Trixie the cat who was curled up in front of a fire. Nellie joined in and licked her ears. Before leaving, I gave Woodie his gift: a bottle of blended Canadian whiskey, his drink of choice. He hugged me and, with rosy cheeks that I kissed, said, "You guys are the best. I love you." I returned the sentiment, wishing him a happy Christmahanukwanzaakah as I left. Woody chuckled and waved goodbye.

I shuffled home, entered a warm, aromatic house and poured a couple of much-needed eggnogs for me and Michael, who had been busy putting the finishing touches on a rack of lamb, a potato and celeriac gratin and bouquet of dainty asparagus. With Calvin in bed, we sat at the table, candles lit, poured ourselves a bit of Cotes du Rhone and recounted the day's sorry events. Still, I was quite humbled, thinking of the Syrian refugees and other immigrants who have endured a most harrowing year, every scrap of their existence, including loved ones, left behind or violently taken. I considered our afflicted child, weighing our difficult circumstance against all we have: a cozy home, Michael's solid employment, plenty of food and drink, running water that is free from lead, a loyal pup, an affectionate child, a lovely garden even in winter, and a seemingly infinite supply of music, friends and love. Again, I realize our immense privilege.

Tonight we host Christmas dinner for some of our favorite secularists. On Michael's menu is a spiral cut hickory-smoked ham, cauliflower gratin and roasted Brussels sprouts. And with those less fortunate in mind and those facing uncertainties of other myriad kinds, some of whom we've donated to in lieu of giving gifts, I'll no doubt be toasting that which is paramount now perhaps more so than in recent years: for love and compassion to conquer fear and hate. 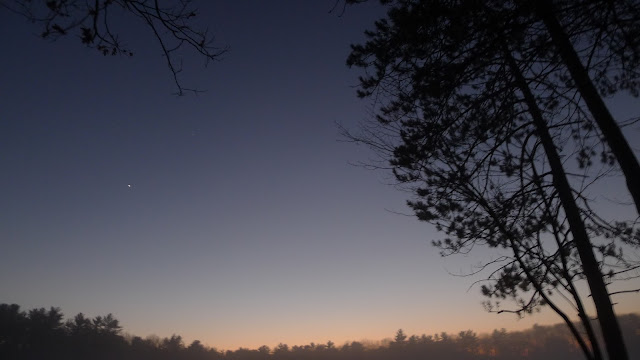 Posted by Christy Shake at 2:09 PM