steeled for the storm

The solstice on its way, days are getting shorter and colder, and just today snow has done its wonders to change the look of things. Broad-leafed rhododendrons curl up like cinnamon-stick figures and bows hang low under an icing of white. Some of these days are dark for me, what with Calvin's seizures, an election gone wrong, and the making of what appears to be shaping up into a Trumpian empire of greed and despotism.

My boy is home sick today, having suffered a grand mal yesterday morning only five days since the one before. These illnesses lower his threshold, perhaps leaving his brain ripe for electrical storms. I steeled myself a week ago and reinstated his benzodiazepine wean. The plan is to reduce it every week by a mere 0.04 mgs twice a day. At that rate—and at his current dose of 2.84 mgs per day (down from a high of 35 mgs) it will take about another year to get him off of it completely. Having said that, I may slightly increase the titration to 0.06 mgs while halving its speed to make the math a little simpler and to give Calvin a longer break between each wean.

The recent two-month pause in the withdrawal has seemed to reinforce my logic that one way to escape withdrawal seizures and other withdrawal side effects is to get him off of his benzo, clobazam, aka Onfi, once and for all rather than hover at the same dose for part of eternity; as long as he is on it he will continue to habituate, causing withdrawals. Until then—and likely for months after its total elimination—he'll probably continue having withdrawals which, ostensibly, should fade over time. My hope is that once he is free and clear from the drug, his number of seizures will improve, as will his balance, behavior, focus and well-being.

As I sit here writing this, free-form, I realize that my son's painful and protracted drug withdrawal stirs emotions not unlike what I am feeling about the election outcome and the prospect of the incoming administration. I'm afraid, feel sick to my stomach at times, dread the future, and suffer some despair with each electric-shock-of-a-nomination that the orange demagogue puts forward. Like with my son's regimen, my mind is laser-focused on how we can get out of the mess we are in, the minority of American voters this election having chosen someone who is so painfully ignorant, narcissistic, dismissive, impulsive, dishonest, crude, unprofessional and unfit to lead this nation.

Perhaps it would help me to think of the baby-man with the bad comb-over as nothing more than a toxic drug, one that has terrible side effects—depression, insomnia and nausea being just a few—and can wreak havoc on the body politic, though is not immune to being flushed, once and for all. If done painstakingly, we can emerge from his smothering (I'm thinking of snow again) in an improved state having weathered the very worst. We just have to steel ourselves for the storm of the century, and think ahead to spring. 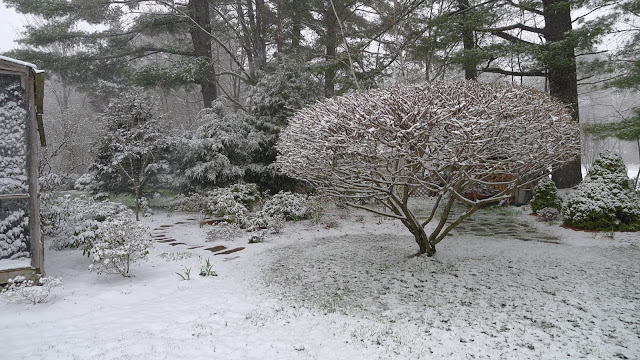 Posted by Christy Shake at 8:10 PM