The acronym stands for situation normal: all fucked up, and it is an apt way to describe life with Calvin, my thirteen-year-old severely disabled, legally blind, non-verbal, incontinent, autistic boy who can't do much of anything by himself and who suffers from medically refractory epilepsy, which is to say that despite pumping him with loads of pharmaceutical drugs, he still endures seizures of various kinds at various times and with varying intensity. Oh, and he is also coping with a ridiculously protracted and brutal benzodiazepine withdrawal and its heinous side effects, which compounds any misery he already bears.

Thankfully, however, cannabis—three kinds of which we use to thwart those seizures—has seemed to help: a homemade THCA oil, a CBD oil, plus a homemade THC rescue tincture.

Today is day ten since Calvin's last grand mal seizure, which began as a partial complex seizure and evolved into a full-on convulsive tonic-clonic. Yesterday and today he has suffered similar complex partial seizures lasting upwards of three or four minutes during which he breathes so shallowly it appears as if he has stopped breathing altogether, which is common though still unsettling. But both seizures stopped within about thirty seconds of giving him a squirt of THC tincture inside his bottom lip and rubbing it into his gums.

This is a good time to mention that I'm ever grateful for Calvin's teacher and ed techs who know Calvin well enough to contact me when he doesn't seem well. They've made some very good calls and have saved Calvin from having any serious seizures while at school. So, too, are we lucky to have a nurse who rarely, if ever, misses work, who loves Calvin and with whom I can leave him when I must go out to do errands or walk the dog or when I want to garden or look in on Woody.

And I would be very remiss to neglect mentioning what an awesome husband I have who is easy on the eyes and does the grocery shopping on days like today and who cooks dinner every night—literally—and who affords me the ability to stay at home, because I'd never be able to hold down a job or a career out of the home even if I wanted to, what with a son who has missed at least seven weeks of school this year.

But even for all of the wonderful things we have at our fingertips including our cozy abode, our kind, loving and generous friends, Michael's steady and absurdly amazing job in this beautiful state of Maine, our situation—our normal—is still seriously fucked up. 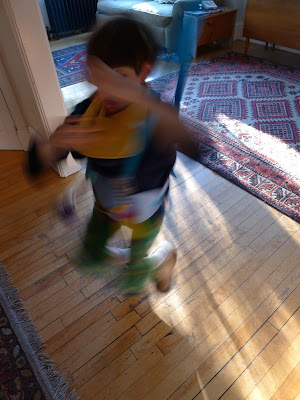 Posted by Christy Shake at 4:16 PM