At two-fifty-five this morning, I opened my eyes and realized that Calvin had been sleeping deeply—too deeply—since we'd put him to bed just before seven. Because of some typical harbingers yesterday, I suspected an oncoming seizure, so I decided to get out of bed and give him a dose of my homemade concentrated THCA tincture while he slept, an attempt to thwart an early morning fit.

Just as I was looking in on him, though, he let out his seizure scream, a disheartening sound not unlike someone who has been scared to death. I hit the timer and grabbed the vial of frankincense while Michael detached the safety netting and lowered the side panel of Calvin's bed. I dabbed a bit of the aromatic oil on the sheet near Calvin's nose, then rubbed some of it on the soles of his feet. The seizure was shorter than most, and after it was over, I gave him his morning clobazam early, plus the dose of THCA tincture I had meant for him to get.

My boy slept soundly for the next hour and a half, though I remained awake next to him thinking about how incredible it was that I woke just moments before the seizure hit. I remembered a study I'd heard about a few years ago citing a phenomenon called microchimerism, a condition in which cells from a fetus cross the placenta and enter the mother’s body where they can become part of her tissues forever. I wondered if microchimerism is responsible for what I like to think of as mother's intuition. I wondered if perhaps microchimerism is the reason I woke just before Calvin's seizure, and why I woke eight days ago in Washington DC at the exact time Calvin was having a seizure at home in Maine, and why I sometimes dream of Calvin seizing, only to awaken mere seconds before he has one.

When I looked into microchimerism, I found its root in the word chimera, a mythical fire-breathing lioness with the tail of a serpent and the head of a goat rising up from her body. In ancient Greek mythology, the chimera was an omen of storms and natural disasters. I often think of seizures as storms in the brain. I sometimes—lovingly—see Calvin as a walking disaster, an accident waiting to happen.

After giving Calvin the THCA tincture, he seemed back to baseline by the time he woke up. I'm feeling more and more confident in THCA's ability to control Calvin's seizures to a great extent, and proud of myself for having fiercely scoured the internet five years ago in search of such an elixir. And at times, I do feel like some kind of chimera, a fire-breathing beast, with Calvin, my little goat, rising from inside of me. 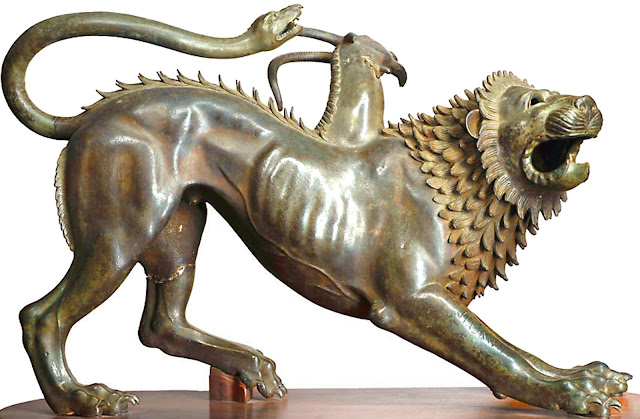