Something came to me the other night in a kind of epiphany. While cozying up to Michael in bed, I was thinking about my dentist's suggestion of wearing a night guard to protect my teeth from clenching them. Assuming my teeth clenching is due to stress, it occurred to me in a flash that perhaps giving up keeping a daily journal would lessen that stress. I've kept a journal since Calvin was diagnosed with epilepsy in 2006. In it I log his behaviors, star the ones which seem to be harbingers of an impending seizure, underling or capitalizing the most vexing ones. In the outer margins I log his bowel movements, indicating their size and consistency. I circle any suppositories or pain medications I give him. I highlight medicine changes in yellow, night terrors/pain episodes in pink, grand mals in orange and partial complex seizures in blue. I note how many times I am up at night laying him back down and covering him, and draw a cloud around nights when he stays up past bedtime perseverating. Rarely do I write positive things, perhaps because of their infrequency or perhaps, in my eternal quest to fix my kid, my focus is misdirected.

I think the epiphany came as the result of something Calvin's new nurse, Sue, said to me the other day. In relating her own history of hypervigilance over a now-grown son who had intractable epilepsy as a kid, she told me he had once said, "Mom, stop looking at me." At the time he was just six.

In her anecdote, I saw myself and the way I physically and mentally hover (obsess?) over Calvin and his condition. Perhaps, if he could speak, he'd tell me to stop looking at him. It got me thinking that maybe the journal—though it has served a purpose in tracking possible relationships between Calvin's seizures and his meds—might at this point be overkill. After all, I think I've got a pretty good sense of patterns in his condition, and I'm not sure writing down omens prepares me any better for his seizures. And if need be, I can also rely on my monthly calendar where I log the important stuff like seizures and medicine changes.

Years ago, I stopped using a handmade chart to check off Calvin's daily medicines. At one time, using it was necessary considering the slew of medicines and supplements he used to get—as many as twenty-three administrations a day—and sometimes I'd forget if I'd given them. Now, Calvin takes so few medicines—Synthroid, Keppra, multivitamins, Miralax, THCA and CBD cannabis oils—that I can remember them without the use of a chart. Years ago, I also stopped listening to the baby monitor when I slept because I'd wake up at the slightest move Calvin made in his bed. Both decisions reduced my overall stress, if only a little.

So, yesterday, the journal went into a drawer. Starting today, I won't be logging anything in it. Though I'll allow myself the right to use it again, I want to see what life is like without it. Perhaps I'll stop clenching my teeth at night. Maybe I'll sleep better. Perhaps Calvin will feel less stress. Maybe in turn he'll seize less. Maybe its absence will open up scads more time for me to do other things instead. Who knows? The possibilities are endless. 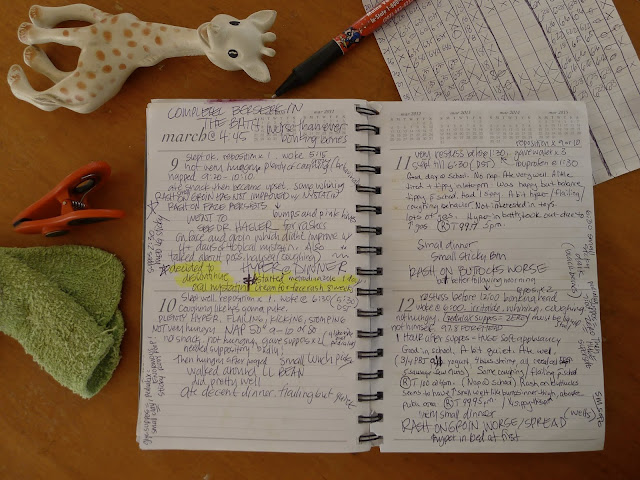 Posted by Christy Shake at 3:16 PM