I am often reminded of the quote by Ukon Cornelius, the famous gold and silver prospector from the animated classic Rudolf the Red-nosed Reindeer. Yukon, thought to be dead after having fallen off of a cliff during a scuffle with the Abominable Snowman, arrives with him at the north pole. In response to everyone's astonishment that he survived the ordeal he retorts, "Didn't I ever tell you about Bumbles? Bumbles bounce!"

Well, Calvin is my own precious little Bumble. Every time he gets knocked down he picks himself right back up. Countless seizures relentlessly batter him yet somehow he recovers with amazing resilience. He takes a tumble and bounces back. Along the way he has sustained his share of bumps and bruises, scrapes and scratches, and who can know what his brain suffers. But it all goes to show us that behind his mild features, small stature and impish grin we have a pretty darn tough little kid.

Our good buddy Garzeloni, after hearing about a bad fall down some stairs when Calvin was just two, and learning that he came out of it virtually unscathed, gave Calvin the endearing nickname of, (and please excuse my french here), Mother-F***ing-Badass. I thought that was not only appropriate, but utterly hilarious. 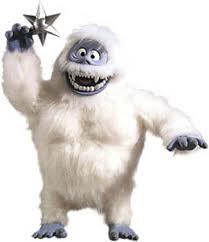 Posted by Christy Shake at 9:29 AM