At 5:00 this morning I heard Calvin on the monitor. I ran into his bedroom to find him on his stomach with his face smashed into his pillow having a seizure. It has been twelve days since the last one, so as we say, he was due. For the past several months Calvin has been going between ten and thirteen days between observed seizures. I can remember when he went weeks and weeks between seizures but I can also recall a time when he had them more than every other day. No matter how you slice it having seizures at all isn’t good.

We find ourselves faced yet again with the dreaded drug dilemma. Hypothetically, it seems simple; increase Calvin’s medicine until the seizures completely vanish. But, when dealing with epilepsy it is anything but a perfect world, and there is invariably a downside to any benefit. Finding the right balance between risk and benefit is the real goal.

To understand our quandary, Calvin’s development has always been painfully slow; it seems to us much slower than watching paint dry or grass grow. The constant seizures further impede his development. Add one or more psychoactive drugs to the mix and development is riddled with holes. So while the ultimate goal is to have no seizures the optimum situation is to have no side effects, which is why we so desperately need a cure.

So when we see Calvin making such magnificent gains in his development, strength, balance, coordination, stamina and attention it becomes nearly an impossible decision to increase his medication for fear of disrupting all of those wonderful gains. Because who knows what causes more risk to a six year old kid, a few seizures a month or 25 mg of benzodiazepines each day? 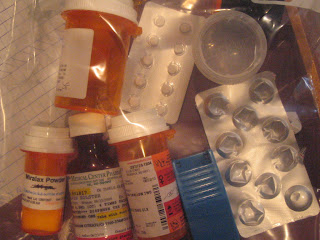