Calvin has both ocular and cerebral visual impairments. His eyeballs are elongated making him extremely near-sided. Without glasses his vision is 20/1000 which means that what a person with perfect vision sees clearly at twenty feet, to Calvin looks as blurry as if it were ten football fields away. In other words, without glasses Calvin can only focus a few inches from his face. Calvin got glasses when he was eleven months old and they have improved his acuity to about 20/90. It is less obvious, however, to know how the cerebral impairment affects his vision. We believe that Calvin, like other people with the same impairment, has trouble with facial recognition. So we don't think that he recognizes us by looking at us, but rather by touching us, smelling us and most of all hearing us.

Funny sounds and music have always delighted Calvin. He has a few favorite CDs that we have heard over the years ad nauseam. Joni Mitchell's Court and Spark has been on the player -- at the very least -- three times a day for the past several years. Brazilian music he thoroughly enjoys and I think that it is upbeat melodies and rhythms that he appreciates the most.

Even before his first birthday his favorite funny noise was a burp. We were guaranteed to get giggles out of him whenever Michael or I (though usually Michael) let out some big manufactured belches. Sometimes Calvin would simply crack up, and then turn completely stone-cold sober until hearing the next burp and then crack up again.

By the time Calvin was two we were still getting mileage out of the burp antic. So when it came time to set him up for his first 24 hour EEG I came prepared. For a little over an hour Calvin sat in my lap while I restrained his arms. Two technicians had to part his thick hair, measure and grease-pencil markings on his scalp then paste, gauze and glue 28 leads to his head with collodion, a syrupy solution of pyroxylin in ether and alcohol. The gauze and collodion was dried with frigid-cold air that came screaming out of a rubber hose. Not a fun thing for anyone to endure. The only thing that got us through in decent shape was burps and giggles, burps and giggles. 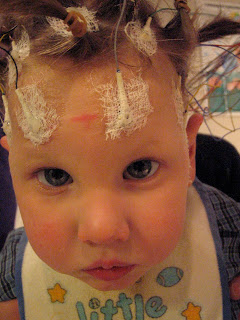 Posted by Christy Shake at 6:25 PM