my teeth don't meet anymore. i can feel it. can no longer chew the skin of fruit and meat as satisfyingly. something about teeth forever shifting forward. molars eroding and gums receding from clenching all these years. i do it mostly when asleep. attempts to calm my jaw have met with some success. still, i can sense the tension in my lips and cheeks.

i see them coming, my son's seizures—a source of some anxiety. the omens are plenty: sun-staring spells. drops to the ground. bad balance. sudden manic tantrums. sour breath. pimply nose and chin and cheeks. fingers snapping madly. his own grinding teeth.

we met a friend wandering in yesterday's heat. he marched right up behind us on the knotty sidewalk, tried passing on the right. one-handed, i wrestled the squirrely stroller. my other hand held nellie's leash. the man's fine hair was tipped with sweat. though his cheeks were flushed, his face was peaked. far from home, he said he'd been running. it was nearly eighty degrees. friends for years, it wasn't clear he recognized me. he spoke a mix of non sequiturs and lucidity. when we reached our house, i offered him a glass of water. he rested on the green couch. calvin hugged him fiercely. when he was quenched we drove him home. a friend was waiting for him anxiously. on hot black asphalt, he waved and thanked us fervently.

while holding calvin in the wake of this morning's seizure, eyes closed, my mother came to me. for years she suffered alzheimer's. we lost her by degrees. my running friend awoke the memory of her. i recalled a photo of her in bed with baby calvin. as a girl i sometimes slept with my mother, my achy growing legs draped over hers, like calvin's slung across my hips. 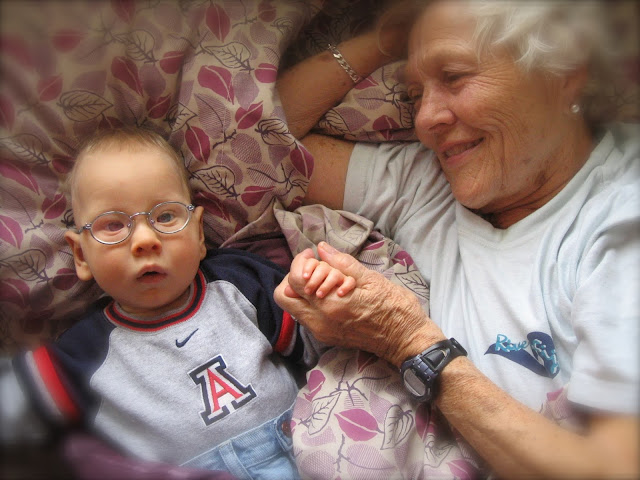 Posted by Christy Shake at 2:02 PM