These past several weeks I've been feeling pretty fortunate, lighter and livelier simply knowing that my son Calvin has only had six seizures in a month's time. Granted, all of his seizures have been grand mals, but since 2007 they've been self-limiting, each convulsive fit lasting about about ninety seconds rather than the twenty or forty-five minutes of yore. Six is the rare figure equal to the least number of seizures in any given calendar month since September of 2016 when he had just five. That was when he was on a higher dose of Keppra by weight, and was still taking nearly four milligrams of the benzodiazepine, Onfi. In other words, this past month he's done as well as when he was on far more pharmaceutical medicine, albeit not as well as a nearly a decade ago when, on high doses of three anticonvusant drugs, his monthly seizures were in the low single digits. But back then we had what felt worse even than seizures: an impossibly manic, agitated and shrieking child who reduced me to tears nearly every day.

What also feels liberating to me lately is the absence of partial (focal) seizures these past several weeks. My gut tells me that their recent disappearance is due to the reduction in Keppra we did in mid May, though it could be due to the increase in my homemade THCA late that same month.

Noteworthy, too, is Calvin's recent growth and weight gain, which was enough to put him on the charts; for the second time in his life he has hit the first percentile for weight for his age. He's also in the thralls of puberty, sprouting hair in all the usual places and, on these hot, humid days, is just beginning to smell like teen spirit. Despite all of this, his seizures aren't going crazy. Knock on wood.

When I am feeling grateful about a relatively seizure-sparse month, it reminds me to be grateful for our other fortunes. I think about how lucky we are to be breathing clean air and drinking clean water, and for the privilege of living in a comfortable home in a safe part of a nation which is not war-torn. Also, we are secularly blessed this time of year to have air conditioning in Calvin's room, and to have a thriving yard chock full of beautiful flowering shrubs, a milky way dogwood in full bloom, a burgeoning perennial garden, and to be able to eat dinners in the screen porch that Michael built years ago. I feel most grateful for our friends, for our community and for Michael's job, and the fact that we have decent health insurance because, as unjust as it is, not everyone does ... yet. I thank my lucky stars for Calvin's various caregivers who help me out a handful or more hours each week. I think myself fortunate to live close to the college campus and its students, its athletic fields and their trails, and to our modest downtown. I owe a debt of gratitude to Calvin's medical marijuana dispensary where I get his THCA flower, and to the amazing folks at Palmetto Harmony for making Calvin's CBD oil. I'm grateful for wicked-smart people who have the wherewithal to advocate for women's rights, the rights of oppressed and marginalized Americans, and for the rights of refugees hoping for asylum who are currently being held in horrendous detention centers at our border, many of the children separated from their parents just as was done to enslaved Africans and Native Americans, and to Jews and others in Nazi Germany, causing great physical and psychological harm.

So this enormous gratitude and humility comes with more than a modicum of hope that Calvin's seizures continue to retreat and hope that our nation will choose to move forward—to progress—rather than to carry on its more recent backwards spiral into dirty air and water, fear, ignorance, hurt, hate and misfortune. 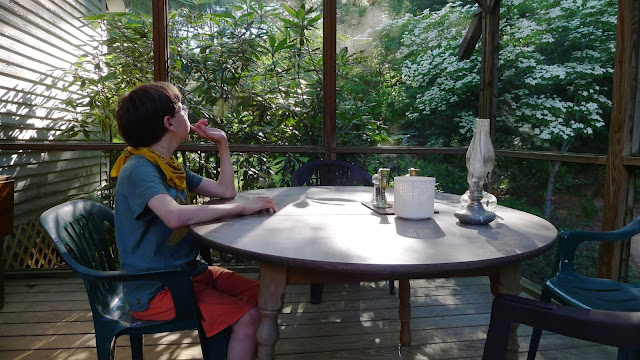 Posted by Christy Shake at 3:45 PM