Thousands of acorns, some crushed. A wad of squashed gum under my sneakered foot. Red leaves with yellow spots and brown edges. A blanket of bronze needles. A pair of broken sunglasses. A dime. An unopened bottle of beer resting on a granite bench. Bird nest with plastic ribbon. Dead squirrel from Nellie's mouth. Plastic bag. Chapstick. Puddles and shards of glass in which I can see myself.

These are the things which, in recent days, have come across my path, or I across theirs; I'm unsure which is the truth. Were they put there for a reason by some divine hand, like some would say is true of everything else? Or did they land there randomly, awaiting others to assign them some purpose or meaning? I'd say the latter.

I remember a conversation with a sibling's in-law long ago. He told me that god put my son Calvin on this earth in his regrettable condition—legally blind, nonverbal, incontinent, cognitively and physically disabled, racked by uncontrolled seizures—so that I could learn something about myself. My face became hot. My heart began to pound. I shut that conversation down as hard as I could:

"I wager you'd feel differently if you had a child like Calvin and saw him suffer every day of his life."

Thankfully, the man shut up.

My son seizes weekly. Yesterday, someone sensitive and with insight, asked me tenderly if his seizures hurt him. I told her they likely did. The spasms cramp and rack his body. His heart races. His breathing shallows. His brain's neurons and his body's muscles march in gruesome unison. He often bites his cheek until it bleeds. I imagine viscous headaches plague him. The other kind of seizures seem to sometimes scare him. I see a petrified expression creep across his face. I've been told by someone with epilepsy that her seizures were terrifying and that she felt as if she were being choked to death. Is this the work of a merciful god? No, it's not. Am I worthy of my son's suffering? No, I'm not.

Yet acorns get eaten by squirrels about to get their necks snapped in the jaws of a dog. Gum gets stuck to sneakers and travels to distant places picking up all kinds of disgusting stuff. Autumn leaves get pressed into scrap books. Pine needles tamp down underfoot. The owners of broken sunglasses are imagined. Coins are passed to endless palms and pockets. Beer gets drunk. Bird nests get burned. Plastic bags go on to hold poopy diapers. Chapstick gets neglected there on the sidewalk. Puddles and shards of glass reflect my tired face, nearby trees and ever-changing skies above me. Some things are given meaning and purpose; others, not. Calvin inspires love and affection, makes those who meet him better people. But he, in his suffering, is no pawn of some so-called merciful god, and yet he gives me purpose, and yet his life is meaningful. 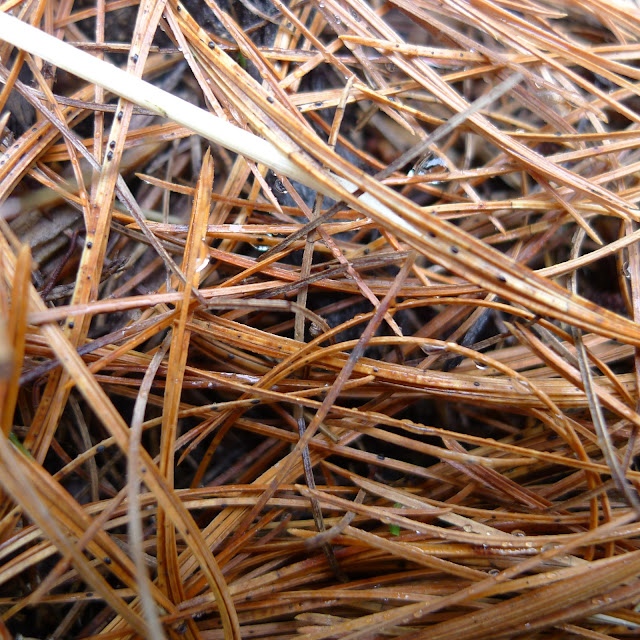 Posted by Christy Shake at 8:37 PM