On the way to Woody's, walking hand in hand with Calvin and Smellie, a friend approached on the other side of the street riding his bicycle. We shouted above a passing car or two, then he peddled across and stopped a safe distance in front of us. After chatting a bit, I asked how he and his family were doing.

"Oh, we're struggling," he said in a resigned tone.

"Yes, everyone is struggling in their own way," I replied.

He smiled, put his head down to find his peddle and nodded. We said fond goodbyes as he rode off.

When Calvin, Smellie and I reached Woody's house, I called him on the phone. When he picked up, and from opposite sides of his window, we complained about the biting wind, and I told him about my conversation with the neighbor. Woody's silence made me think he agreed that life is strange and difficult right now.

I've been thinking about the tens of millions of unemployed Americans struggling to make ends meet. While I believe we need to continue to shelter in place to mitigate the stress on the healthcare system, I'm sympathetic to the need for hurting people to get back to work. So, too, I've been lamenting those who are sick and suffering and who have lost loved ones to this insane virus. I've been missing seeing friends, gathering around a table to share food and drink and to shoot the shit from across a table. I miss the college students terribly; their absence is palpable and I know it has been hard on them to be away this semester. I feel things have been particularly devastating to doctors, nurses and teachers, especially those with young families.

Strolling home from Woody's house, Calvin turned to me for a hug, and while I embraced him I took a deep, collective breath for everyone. 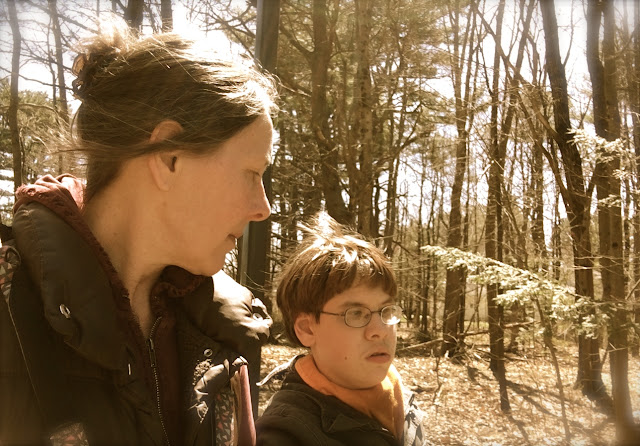 Posted by Christy Shake at 7:58 PM