The snow hadn't yet begun to fall when I heard my son cry out at nine last night. I only half expected the seizure's arrival, this one in the wake of the full moon and a decent eleven days since his last grand mal. As usual, I crawled in bed next to him to make sure he kept breathing—the twenty minutes or so after a grand mal being the most risky to succumb to SUDEP (Sudden Unexpected Death in Epilepsy.) Just as I was falling asleep, Calvin clocked me in the face with his fist while he was shifting. I decided it was a good time to go sleep in the bed with Michael. Sadly, the extra THCA oil I'd given Calvin after the first seizure did not thwart the arrival of a second grand mal at 4:45 a.m. Perhaps it would have worked if I'd waited until midnight to administer it, but I was so goddamn tired I just couldn't.

By six the snow was coming down in gnat-like flakes, some of them floating upwards and crosswise as they neared the window. Like most everything in these coronavirus days, snow in May, even in Maine, is strange. Watching it come down, head on my pillow, I imagined it as some magical dust, some cooling off of the white-hot suffering, despair, frustration and anger many people are feeling during these essential shutdowns.

Slowly, I rose to see the garden, worrying that the young peony shoots might have been burned by the night's frost. Since yesterday, many blossoms have opened on the pink and purple small-leafed rhododendrons, a white one having already beat them to it. The garden is gradually coming into it's glory, even as deciduous trees are still mostly naked, save some tiny leaf buds emerging.

As if winter, today has been spent indoors trying my best to help my suffering kid feel better. He's not back to baseline, is more restless than usual, has clammy hands, stinky breath, foamy drool and no appetite to speak of. I'm tired and achy, and the sore throat I developed the other day is only slightly better. Still, looking out over the garden, the snow having finally given up without sticking, I'm feeling grateful. I have a house chock-full of windows, a gorgeous garden to devour and in which to wander, a sweet and loving husband who does all of the cooking, friends who leave delicious care packages on our porch, good books and films to lose myself in, and the privilege of not being a frontline healthcare or other essential worker during this pandemic.

But despite all there is to be grateful for, I'm still nervous about what is going on in this country, and ashamed of some Americans' behavior. It vexes me to hear that grocery store employees are being harassed by customers who do not want to follow state guidelines for wearing masks in public. I'm incensed at the ongoing lies, backpedaling, blame-shifting, cronyism and hypocrisy coming from the White House. I'm sickened by the news of hate crimes—so many still going unpunished—of innocent Black and Brown people who, amid their ongoing oppression, are disproportionately affected by this pandemic.

Outside, it's still below forty, though with winds at eighteen miles per hour it feels like the Arctic. But I'm sitting here at my desk with a view of the garden. Michael is home taking care of Calvin, who is doing slightly better and will be heading upstairs to bed fairly soon. I've just lit a fire in the wood stove and poured Michael and I a couple of early cocktails. Later, we'll warm up some ridiculously delicious chicken enchiladas with spicy salsa verde, and discuss the messed-up state of the nation. Then, we'll muse on gratitude, and I'll go to bed early and tired, though hopefully not pitying the situation with our own messed-up kid, but rather sympathetic for those out there in the world who are truly struggling. 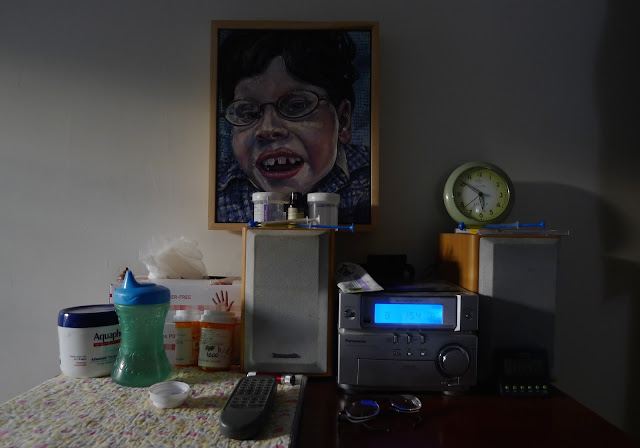 Posted by Christy Shake at 5:23 PM