Suppressing my instinct to embrace her felt strange. It had been easily two months since we'd last met over coffee to discuss politics, writing, dreams, food. At a safe distance—more like ten feet than six—we took Smellie to the fields and made our way along the path through the woods, veering into the brush whenever we encountered others. It was only the second time since all this coronavirus craziness began that I met with a friend. As we strolled, we caught up on each other's goings-on, and that of our sons and husbands. We toyed with the idea of the four of us gathering for cocktails around a backyard fire, but neither could say when we'd feel comfortable enough. It seems there's still so much we don't know about this virus, and we worry about letting our guard down.

When we arrived back at the house, I considered offering her something to drink so we could sit and enjoy the dwindling afternoon sun in the garden. But I'd have to touch her glass, I thought to myself while trying to work out how I could logistically handle it safely. She told me she had to be on her way, anyway. So I walked her to her car and, from yards away, we gave each other air hugs, and I blew her a kiss goodbye as she drove off.

Later, I told Michael that though I loved seeing her face and visiting with her in person, it felt dispiriting to have to keep so far away from someone I like so much. There's something melancholy and alien—especially since I, like Calvin, am a very tactile person—about seeing beloveds but not being able to hug them. It's a feeling I don't get when I FaceTime with others, though there's a tinge of emptiness in doing that, too.

But until we feel in our bones and guts that it's safe to gather, drinks will be made for one couple. These chairs will be lounged in only by us. The garden will be visited by no other humans, except maybe in passing. The backyard fires will be warming just two. 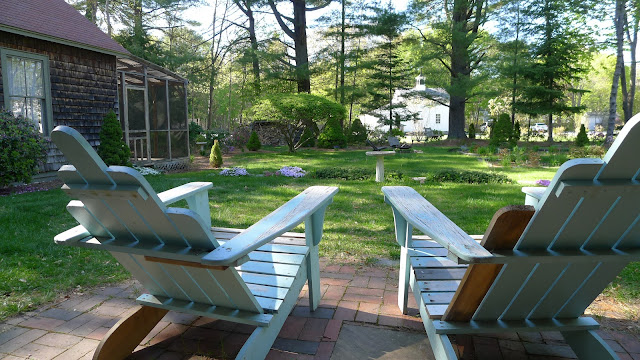