cross your fingers, knock on wood

yesterday, calvin cried. i cried hard, too. his furrowed brow and pouty mouth are enough to slay me. it was the first time in a long while for both of us. what was the source of his misery? was it yesterday's three seizures? the rectal valium's side effects? did he have a headache? was he nauseous or crampy? i wondered if there were more seizures coming despite my best efforts to stop them. i wish i knew. living with epilepsy is hell on earth—the only hades i believe exists. i'm certain there is no merciful deity. no god pondering whether or not to save my kid from his suffering and afflictions. as calvin's mother, it's obvious. nature is simply going about its business. but i'm not offended by its indifference. the offense is in dogma which insists calvin's suffering is part of some divine blueprint. that would be sadistic.

after years of various seizure treatments—trileptal, keppra, depakote, klonopin, lamictal, zonegran, ketogenic diet, neurontin, banzel, clobazam, cbd, epidiolex, a second try of keppra—we're left with few options. but with mounting seizures, we feel compelled to try another drug, lest his fits run amok more than they already do. he's had so many these past few weeks. and he hasn't seemed very happy for years. his smiles are fleeting. a lot of the time he doesn't really seem to enjoy himself or feel good. for years he has been suffering a handful of grand mal seizures every month, plus some focal ones. he misses too much school. instead, he camps out on my lap, in his bed or on the couch. it isn't much of a life for either of us.

so, after months of research and consideration, we're going to try a novel drug. its generic name is cenobamate, its brand name, xcopri. it hasn't been around for long, but it reportedly surpasses other drugs with regard to seizure freedom. of course, like all the other drugs, the side effects are scary. so, with an abundance of caution, i'm putting calvin on half the recommended starting dose; his neurologist—who knows i'm in charge—is with me. i'm both frightened and hopeful. so many drugs have failed my child and caused a number of miserable and enduring afflictions, worst of all his wicked restlessness, which is a barrier to most everything.

yesterday, when i began writing this, i set out to craft a more poetic post. one with gorgeous, lyrical imagery, the kind that helps me escape my grief and stress. the kind that can maybe take you away to somewhere else. a dreamy post, describing back road travels, with painterly landscapes, sky and water, and the lovely friends and strangers you and i might meet there. instead, i feel it's just another entry about our hardship, worry and despair. and so at least i'll leave you with this photograph of yesterday's sunrise on a field skirted by trees bright as wildfire. from afar, i saw a ghostly mist shrouding the lawn. i meant to capture it. but the nearer i got, the more it dissolved, until finally it was gone. i'm hoping that can happen with calvin's seizures. cross your fingers, knock on wood. 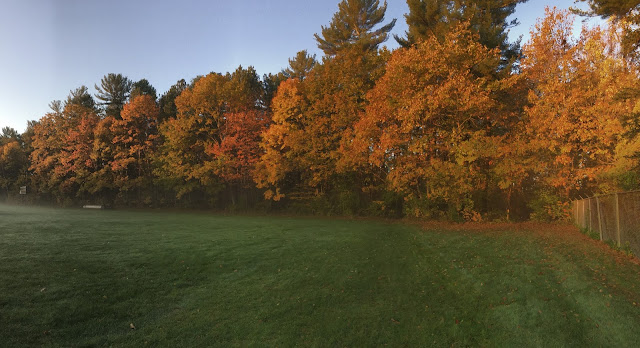 Posted by Christy Shake at 6:10 PM