he fell asleep easily, cuddled up in my lap on the green couch. although he is still tiny for his age, it's impossible not to notice how big he's getting. i wonder if he's outgrowing his thca cannabis oil dose. no doubt his hormones are raging. half an hour later, he woke suddenly, and by the distressed look on his face—a look that seemed to say, save me, mama!—i knew he was going to seize. i got out from under him so i could more easily keep him on his side to prevent him from aspirating. the grand mal was like all the others—ninety seconds of rigid, crippling convulsions, his fingers, ears and lips tinged grayish-blue from not breathing—except that this one occurred midday, like the last one that happened in the car. i hope daytime grand mals are not becoming his new normal. it's a troubling couple of events to say the least. still, i can be grateful he went ten days without any at all.

sitting here keeping vigil, i study his features: his noble nose, striking eyebrows, high cheek bones, full lips, smooth, thick hair. he's a handsome boy—strong, square shoulders, a broad back, narrow waist, good abs and pecs—and would have been more so had his brain filled out before he was born. but for whatever reason, it didn't, which accounts for the fact he is nonverbal, legally blind, uncoordinated, developmentally delayed, and racked with seizures.

of late, i've been feeling a bit more envious than usual; i guess that can happen when one pays attention to the rest of the world. i see photos of this year's seniors in high school; calvin should have been one of them. many are sons of my friends. they're good looking and fit. some of them are quite tall. all of them are athletic. i see them in photos on social media wearing their team jerseys, draping their arms around their friends' necks. i see snapshots of some of them running. i see other pictures of them hanging out with their families on trips to visit colleges, at sporting events, camping with their dads. and although i love seeing these pics, which are fascinating and never fail to swell my heart and bring a smile to my face, it's impossible not to feel cheated. parenthood's most precious moments, which are many, at every turn and milestone and in most every way, continue to escape us.

my son is sleeping on the couch now, his eyes half open at times, his brain likely still vibrating (did i tell you that one night after a seizure, i slept with my head against his and could feel his brain humming? most disturbing!) i've just now dripped some extra cannabis oil into his mouth, hoping to avoid another cluster of seizures like we had a couple of weeks ago. it's softly raining, which has a soothing effect on me, and a way of not making me feel like i'm missing out entirely. i glance outside and see a kid walking down the sidewalk with his mother and their dog. i feel a jealous pang. envy is a strange thing. they call it the green-eyed monster. and if you've ever gazed at me up close, you'd see i fit that description to a t. 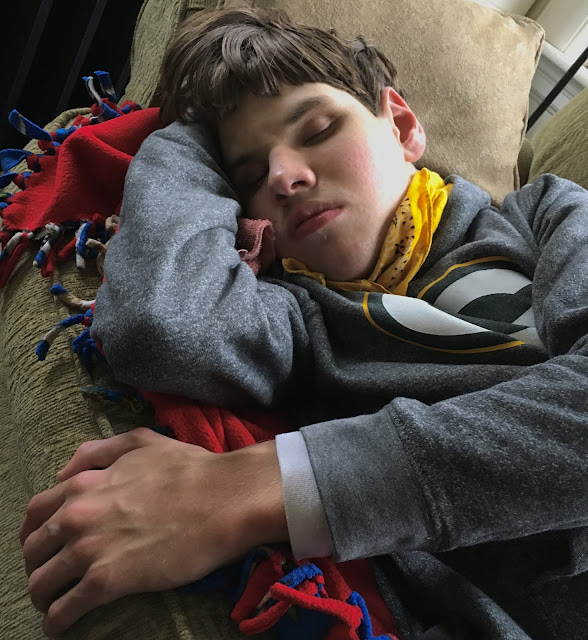 Posted by Christy Shake at 4:35 PM