the lilies are withering, their supple edges starting to darken and curl. their delicate petals drop like tears. stamens cling doggedly to the center of each blossom's throat. like tulips, their demise is gorgeous, something so worth witnessing rather than dumping them into the compost upon first fade or wrinkle.

in the garden, the black-eyed susans are beginning to shrivel. the phlox are going to seed. the peony leaves are turning yellow, red and purple. inside, because of my unintentional neglect, the fire in the stove is having a hard time getting started. as on most days, my son is a constant and annoying distraction. it's hard to get anything done when he's home. no reading, no writing, few chores. he tromps around the house and yard in purposeless circles, like some crazed, caged animal; sometimes i wonder. i spent over an hour trying to get him to do his business on the toilet—sit. suppository. wait. get up. walk. repeat. i have to stand in the bathroom to avoid disaster from happening. i won't go into the shitty details. suffice to say it's better than years ago.

as i while away the hours beside my aimless child, everything piles up—the tending of the garden, the dishes, the vacuuming, the dirty laundry, the mounds of clean clothes. it's not that stuff doesn't get done. it's just slow. thankfully, my husband helps, plus does all the cooking.

yesterday, i was up at 3:30 a.m. caring for a shivering boy who has been on the verge of a seizure for days. his teeth were chattering madly from an alarmingly subnormal temperature, probably brought on by a haywire brain. i'm spent. and when he's like this, i wonder and dread if he's withering too.

when i'm inside this house alone with my son, which is often, i feel so disconnected. his presence is not always comforting. we don't converse (he's nonverbal.) he's often unreachable, seemingly looking right through me. he is mostly non-responsive to instructions. and yet, he expresses some of his needs. he searches me out, sits in my lap for five or ten seconds before getting up and motoring on. moments later, he does it all again. that's no exaggeration. it's disturbing. at times, he's so unsettled. tense. troubled. his behavior is often intolerable. i can't say how he feels. but this empty feeling he has carved out in me never fully fills or heals. i don't always hold it together. but i must forgive myself the unravelling. it's all a part of the process. survival and regrowth.

yesterday, i saw a young father at the grocery store. he was dipping his head into his tiny baby's carry-cradle. a stranger commented on the infant's cute face. i watched the baby gaze at his father and the stranger the way calvin never looked—or looks—at me. almost no one told me our boy was beautiful. at least that's my memory. maybe they would have if i had seemed more open and approachable. instead, i was beset by loss and grief because of his deficits. had become a shell of myself while feeling the weight of an alien world. that was a long time ago. back when i first began my withering. and yet, maybe the process of opening, coming apart, and emerging into something altogether different, if looked at in the right light, can be beautiful. like a fragile flower dropping its petals in a show of naked surrender. 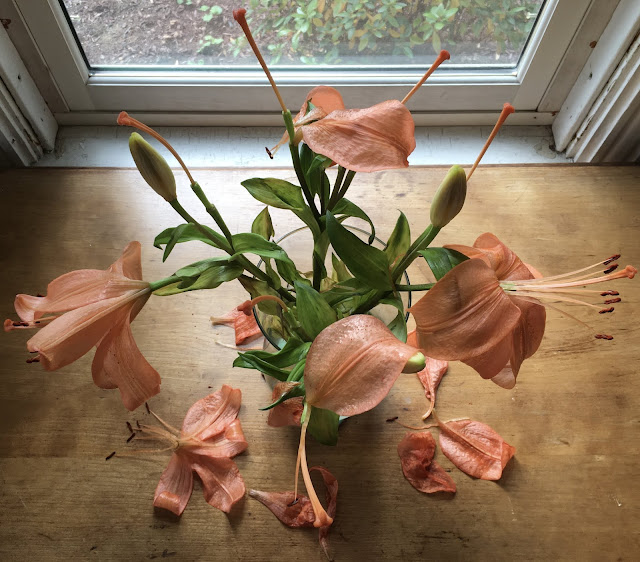