looking back at recent posts, i realize i haven't been using capital letters much. somehow, lower-case-only promotes stream of consciousness, but it's also a way of conserving effort instead of expending it. lately, i feel the need to save all the energy i can just to deal with these seizures and this child of mine.

calvin continues to be hammered by epilepsy. yesterday, he had another grand mal—his fifth in a week. he also had about a dozen focal seizures over four days—more than he's had the entire year. he had one or more seizures every day for a week. i can't recall that ever happening. i have no idea what's causing this bad spate, especially in the wake of nineteen days of virtual seizure freedom. could it be the new strain with which i made his cannabis oil? could it be the ketoconazole cream we've been using for the rash on his neck and chest (the oral version can cause seizures)? a growth spurt? a reaction to the flu shot he got five days before the string of seizures began? some underlying illness we can't detect? a change in his hormones or metabolism? the full moon? last week's car accident? some combo of the above to create a perfect storm? who knows?

yesterday's seizure occurred just after midday, a very rare time for him to have a fit. we were in the car on our way to pick up groceries. calvin let out a blood-curdling screech in the back seat. i took a quick left onto a side road, pulled to the curb, unlatched his seatbelt and laid him down so he wouldn't aspirate. pieces of apple and bile sputtered out of his mouth. when it was over, i tried driving home while he was still laying down, but couldn't latch the seatbelt, so i had to prop him up as best i could. he sat there, kind of sideways, his head drooping as if he were drunk.

at home, i was able to lift and carry my five-foot tall, eighty-five-plus-pounds-of-mostly-dead-weight child into the house and over to the green couch. no doubt i resembled the image i've used on this blog of charlotte gainsbourg's character carrying her son in the film, melancholia. i sat next to calvin as he laid on the couch poking his eye, rubbing his fingers together, and grinding his teeth. disconcertedly, he never went to sleep.

last night, i got up sometime after midnight and gave him a syringe full of cannabis oil, this one having been made with the same strain—chemdawg—that he had decent success with for years. a few years ago, when the cannabis dispensary changed hands, chemdawg became unavailable. now, we can never seem to get the same strain twice, and i imagine strains might make a difference in the treatment of epilepsy. what to do?

thankfully, calvin didn't have a seizure last night, but i'm not certain he is out of the woods. he's nowhere near baseline—having been sleepy and spacey most of the day. i have no idea what the hell is going on. there aren't many options left in my back pocket beyond riding this thing out and/or considering adding a second drug to his regimen, which i'm loathe to do. i'm fearful he's going to get hammered again, either by more seizure or the side effects of the drugs used to treat them. most of all, i dread him having a seizure that doesn't stop. please stay tuned. 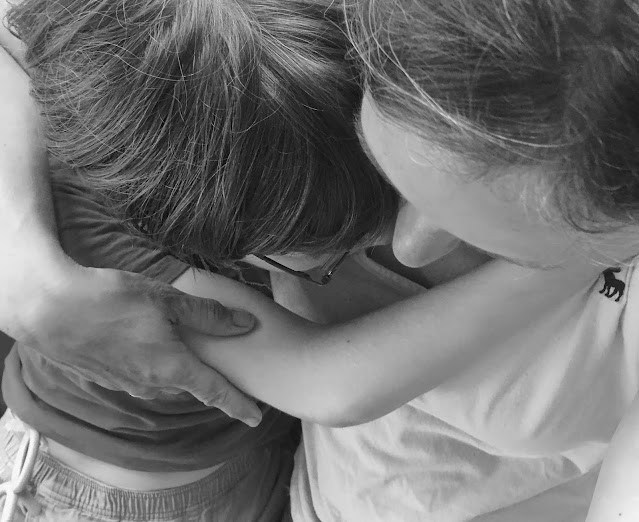 Posted by Christy Shake at 6:27 PM