Awhile ago, while listening to a podcast about abortion, a sickening thought popped into my head: what if my obstetrician concealed the fact that my fetus, who became Calvin, was missing some—perhaps most—of the white matter in his brain? 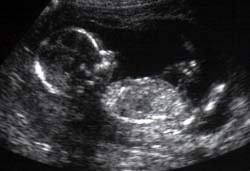 Posted by Christy Shake at 2:46 PM