We sat in the closeness of the sticky mid-morning heat, our bare arms and thighs touching. The rickety bench Woody gave me, one that dropped another screw recently, held us even as it swayed under our weight. I wrapped my hand around hers and kissed her cheek. We drank little rivers—she a sparkling citrus-scented water from a can, and I tap water held in a heavy green glass. We listened to a goldfinch sing as the wind swept through the trees. It felt as if we were the only ones in the world, and tears of sorrow came to us both as we contemplated life's tragedies.

During our walk earlier, she and I talked of mosquito bites, politics, running races, friendships, gardens, daughters, sons. Something flew up the open leg of her shorts and stung her repeatedly. I peeked into the back of her waistband and a bee—or was it a wasp?—flew out. She bent and plucked flat leaves of plantain, put them in her mouth, chewed them into a mash and applied tiny wads to the stings as a medicinal salve meant to draw the poison out.

"Everything we need is here for us," she said, meaning that nature is the original balm, then adding that we've just forgotten how to use it. I thought of Calvin's cannabis oil and how well it seems to help quell at least some of his seizures.

On our walk home, we stopped to cut—with permission—bunches of nodding sunflowers from our friends' backyard. Some of the smaller ones, which were still closed tightly like little fists as if reluctant to open to today's world, reminded me of my newly-born, four-pound, six-week preemie's apple-sized head and cinched brow. What a difficult yet extraordinary road it has been since then.

Later, when early evening came around and as I washed up dishes listening to my Calvin moan and rustle in his bed upstairs, I was again on the verge of weeping. My son is so often out of sorts or miserable, suffering from one thing or another inevitably brought on by seizures and/or their drug treatment. Though it had only been five days since his last grand mal, I could sense one coming by his bad balance, stubbornness, intensity, neediness, sour breath, eye poking, fingers in his mouth and mine, the new moon on the rise. I thought again about my earlier conversation with my friend. While strolling along a wooded path we had discussed abortion and the recent Supreme Court's abysmal decision to reverse Roe. I told her that, had I known for certain early on in my pregnancy that Calvin would be born missing most of the white matter in his brain which would cause him to be legally blind, uncoordinated, nonverbal, incontinent, cognitively impaired and—worst of all—be pummeled by thousands of uncontrollable seizures, I might have chosen to end the pregnancy to spare his suffering. To say that life for him is limited and presents major daily challenges, pain and miseries would be a gross understatement. Lamentably, there is so very little that Calvin seems to enjoy, mostly because he's been ruined by the drugs which cause him, at the very least, to be impossibly restless, making it harder, too, for me to live the life I want to live.

Just before my husband arrived home for the evening, I sat near the open French doors which look out onto the garden. There, while I reflected on my day and wrote this post, I came across this poem by Ellen Bass:

to love life, to love it even
when you have no stomach for it
and everything you’ve held dear
crumbles like burnt paper in your hands,
your throat filled with the silt of it.
When grief sits with you, its tropical heat
thickening the air, heavy as water
more fit for gills than lungs;
when grief weights you down like your own flesh
only more of it, an obesity of grief,
you think, How can a body withstand this?
Then you hold life like a face
between your palms, a plain face,
no charming smile, no violet eyes,
and you say, yes, I will take you
I will love you, again.
It struck me that I'd come across a poem so fitting for me, for my life with Calvin, and for the day I had just lived.
Just as Michael and I were sitting down for another sublime dinner in the screen porch, I heard Calvin make a strange noise. In that instant, I thought again about grief—ours, his, my friend's, everyone's—as I bounded up the stairs to find my sweet, pure, innocent beloved son—the boy who rocks my world in the most terrible, lovely, heavy (an obesity of grief) and amazing ways—as he was seizing again. I stroked his thigh and Michael embraced him and kissed his face. We've done the same perhaps thousands of times before and will very likely do the same a thousand times more, because Calvin is our precious son, and because it is our life, and in most ways we love it, and what else is there? 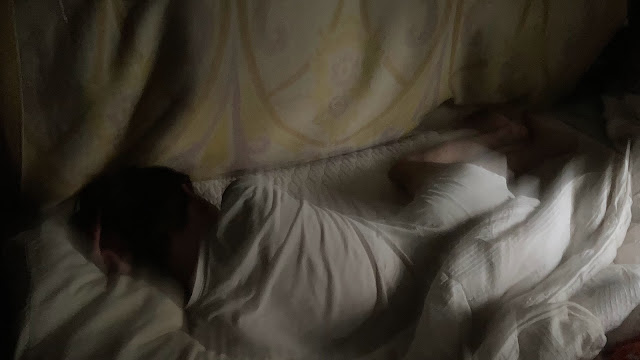 Posted by Christy Shake at 4:32 PM