a good day to die

The day my father died I spoke to him on the phone. He’d been battling multiple myeloma for five years, since he was sixty-five, and it was the first day in months that he’d spent time alone in the house. He’d recently recovered from consecutive bouts of pneumonia which had landed him in the hospital, and for months he’d been drugged up on morphine to blunt the pain in his bones. Our conversation went something like this:

“Hi Dad. It’s me.
“Hey, Shorty.”
“I’m calling from New York. What’re you up to today?”
“Well, I swept the garage and brought in some wood for your mother, then I checked the oil on the car.”
“Wow, that’s great! Is Mom there?”
“Nope. She went into town to do a couple of errands.”
“How’re you feeling today?”
“Pretty good ... I think I might’ve turned the corner.”

I told him that I loved him and he said it back. I hung up the phone wondering which corner he had turned. Later that night I got a call from my mom and my brother telling me that Dad had died. It occurred to me that it was a good day for Dad to die, one in which he felt worthy, accomplished things, and felt good enough physically and lucid enough to do so.

This past weekend Michael and I watched out thirteen-year-old chocolate lab Rudy hobble around on his weak, arthritic legs, one of which he suddenly can’t put much weight on anymore. Last week he stopped eating his breakfasts. He’s lost some weight and has long been incontinent. A visit to the vet on Thursday resulted in a substantial increase in painkillers and anti-inflammatories in a last-ditch effort to get our Rudy back into decent shape. Our strategy didn’t work, and after a lot of thought we decided that today is the day we’ll be putting Rudy down.

It pains me to do so. Every cell in my body wants him to get better, wants his elbow to miraculously improve. I know deep down inside, however, that it won’t, that he is in pain, even though he wags his tail, still enjoys munching on dog biscuits, still wants to follow us around the yard even though he is terribly lame.

Today will be a good day for Rudy to die because yesterday our friends Brian and Joanne, Luke, Sarah and Jacob, Matt, Macauley and Carol and their black lab Millie came by separately to say their goodbyes to Rudy. There were tears and wags, and glasses of beer and bourbon. As Rudy and Millie sniffed each other, Macauley recounted the legend of the Oglala Sioux warrior Low Dog, who was thought to have said before going into battle, “It is a good day to die.”

Today will be a good day for Rudy to die. The ground has finally thawed. The fragrance of spring is on the wind. Birds are chirping. The vet is making a house call. Rudy is still in good spirits. But as I write this I can’t help but weep. He’s been such a good boy, friendly to everyone, loving, loyal, affectionate, well behaved, albeit stubborn in his final months. We’ve been lucky to know him and terribly sad to see him go. But as he goes, he’ll have the sun shining on his chocolatey coat, the grass as his bed and Michael and I there hugging him goodbye. 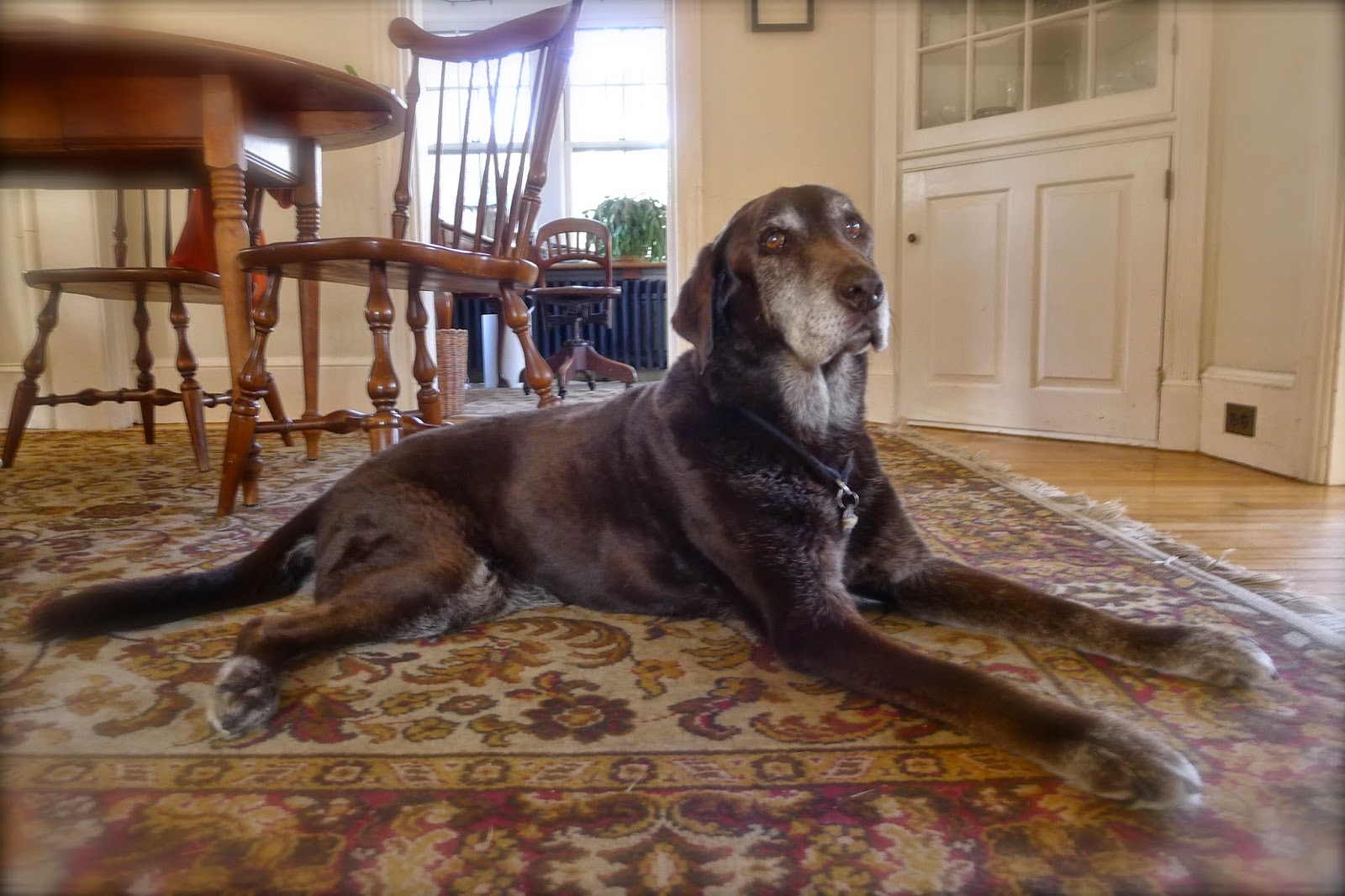