Our kid was born pretty messed up. He was six weeks premature, was missing a significant amount of the white matter in his brain, had terribly low muscle tone, had trouble breathing on his own, couldn’t nurse, practically couldn’t see and went on to develop a whole host of other ailments, the worst of which is intractable epilepsy—his seizures remain uncontrolled.

Calvin’s continued seizures ruin any chance of a hope for improved development. Because of them his brain is regularly fried by electrical impulses running rampant even in the face of taking powerful drugs meant to thwart them. Because of the seizures his development continues to be—at very best—two steps forward and one step back. The drugs he must take to try and control them can seem as bad as the seizures themselves, causing hideous side effects from headaches and dizziness to lethargy and lack of coordination, not to mention delaying his development even further.

But besides the epilepsy and drugs—and in great part due to them—a major challenge for Calvin and for his caregivers is his inability to walk by himself. Since Calvin took his first few steps just over the age of two he has made little progress toward that goal, especially given five years has passed. Looking through a microscope we can see the changes and are grateful for them, but he never seems to gain the advantage over the disruption of balance and coordination that the seizures and the drugs cause.

Every single day I wonder if Calvin will ever be able to walk by himself. Every single day we remain tethered to each other. Every single day I ache for my own autonomy and for his. But for now, and for the foreseeable future, we are inextricably linked. Whether we like it or not this little fish of ours has got us caught, hook, line and sinker in a tangled web of seemingly endless seizures and drugs.

Please share Cavlin's story with others. Help bring us one step closer to a cure for epilepsy one story at a time. 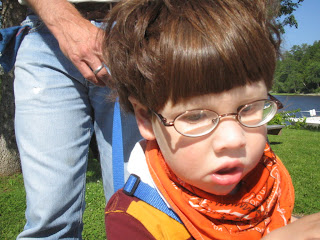