Last night—after a good day at school, a short nap, and an unusually quiet afternoon—as Calvin was taking a bath he started becoming increasingly manic, spinning and splashing madly and screaming wildly with clenched teeth. I let the water drain early and helped him step out. Wrapped in a towel he walked to our bed with incredible balance as I held him only slightly.

During dinner Calvin remained unruly, erratically kicking his feet and flailing his arms. His shrieks, which pierced my eardrums, were punctuated by eerie cackling and low, blood-curdling screeches of horror flick fame—all complete mania. If that weren’t enough to convince me of an imminent seizure, his remarkable balance while walking after dinner was. I could have released his harness reins allowing him to tool around freely without fear of a fall. I have never seen him walk so well, and thus, I was more than convinced of an approaching seizure.

Throughout the night Calvin tossed and turned, waking several times to drink water from the bottle I give him, and rising at 4:50 a.m. repeatedly slamming his head into the mattress. He quieted after Michael changed his diaper. Perhaps he was silently seizing in his crib as we tried desperately to get a few more winks.

Just past seven, after I had spooned in Calvin's seizure medicines hidden in mounds of creamy yogurt, his face paled slightly, his blue eyes wandering the room. And although he continued chewing a piece of sausage, accepted his water bottle to drink and picked up a slice of cherry, his rote manner and spaciness told me he was having a partial seizure. I watched him carefully and when I saw the right side of his lip pick up, as if tugged by an invisible thread, I hastily removed his tray, unbuckled his lap belt and whisked him to the couch. A minute had already passed when his partial seizure became full on tonic-clonic (grand mal.)

It was violent. His cheeks flushed as his body froze rigid. He had a terrified look on his face as stiff little limbs cramped and crumpled into fierce rhythmic spasms, his eyes furiously blinking and his mouth twitching in morbid unison. My sweet boy sounded as if he were being strangled, the air squeezing in bursts through his taut throat, blue lips to show for it. This unruly menace, which scrambled Calvin’s brain and wasted his body, lasted nearly five minutes.

Within an hour Calvin had three more partial seizures, the last showing signs of morphing into a tonic-clonic again, his bizarre twitching grimace appearing behind the thumb he was sucking. So, I gave him the rectal Valium, and waves of pure sedation lapped over him until at last he was peacefully asleep. He’s so beautiful when he sleeps ... until he wakes up into another seizure, and another, and another. 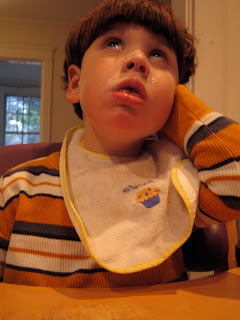