As I hold his hand under the covers he begins to settle, and I think about how big and strong he is getting. I muse on the straitjacket. As my mind ambles toward sleep I remember something my parents told me, about how they struggled with my brother’s thumb sucking, feared he would ruin his bite and have to get braces that they couldn’t afford. They told me they had put hot pepper (or was it hot sauce) on his thumb but to no avail. Instead they tied his hands to the bed frame so he couldn’t reach thumb to mouth. I shudder at the memory of their description. My stomach sours imagining my brother as a helpless little tot simply wanting—needing—the self-soothing we now know is so important to a child’s healthy development, while at the same time understanding my parents' worry. Heartache.

My sweet boy’s breath fans my face as he drifts off to sleep. I let him loose from the mama-lock and drape my hand across his shoulder, kiss his forehead. No matter how insane this household gets hopefully there will be no straitjackets. I’ll leave that one open for interpretation by the next new fashion crazed designers. Straitjackets, padded leather truckers and Kevlar jeans. Perhaps already been done. 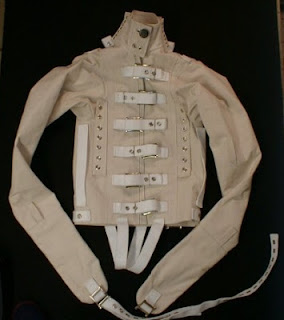