Sometimes I wonder if it’s the moon, its gravitational pull on everything earthly, perhaps beckoning my son’s seizures, releasing the pressure that has built up in his brain’s tectonic plates.

Everything was going along swimmingly. We had begun Calvin on a yeast-eradication protocol to rid him of what we think are stubborn colonies hanging out in his gut wreaking havoc. The thinking is to give him oral anti-fungals to kill the yeast, which in turn will reduce or eliminate the inflammation in his gut, which we hope will boost his immune system since every time Calvin gets even a mild cold he has a seizure. With luck this method might lead to better seizure control—perhaps seizure freedom—without continuing to increase and/or add seizure medicines; high doses of three anticonvulsants are more than enough to F-up Calvin’s balance, coordination, vision, cognition, behavior, memory and development.

So, Calvin is sailing along for fifty-seven days, almost triple the stints he’s gone since his all-time best performance of seventy-eight days, seizure free. In my room I have begun writing chapter four of my book. Calvin is in the bath, his nurse on watch. Amidst his vocal and playful splashing he goes silent ... for a long time. I think it very odd, and just before I get up to look in on him, and suggest perhaps he come out of the bath, I hear him begin to play again.

Several minutes later the nurse calls me and I jump. “I think he’s having a seizure,” she says, and I see her carrying my boy in her arms to the bed. He is naked and dripping and seizing. I grab a towel and lay it over his thin body, which is eerily still. Unlike most of his seizures this time he isn’t convulsing. He looks as if he is dead but for the faint pinkness of his lips that are tinged with blue. His eyes are wide open staring, vacant. “Oh Calvin, it’s going to be okay ... Mama is right here,” and I kiss him in the warm nape of his neck. We lay my sweatshirt over his exposed legs and I kiss him again then glance once more at the clock. At three minutes he begins to come to life with a little whimper, and when I kiss him once more he says, “Uh-uh,” which is his way of saying “Mama.” He knows I’m there.

The nurse and I get his floppy, drunken body into his diaper and pajamas then lay him down in his bed for an hour’s sleep. When he awakes we bring him downstairs to give him his evening meds. “Man, he’s whiter than white,” Michael says as we buckle Calvin into his high chair. My boy has a pained expression, a furrowed brow as if he is going to cry. “I know, honey, we just have to give you your pills,” and I know he has a headache. And so Calvin opens his mouth, like the dutiful boy that he is, for four white Clobazam, three blue Keppra, two pink Banzel, two grapefruit extract anti-fungal capsules and one Ibuprofen. We skip the digestive enzyme. Then we scoop him up and bring him back to bed for the night.

In honor of Calvin's ninth spin around the sun please donate what you can to CURE epilepsy at: http://www.calvinscure.com 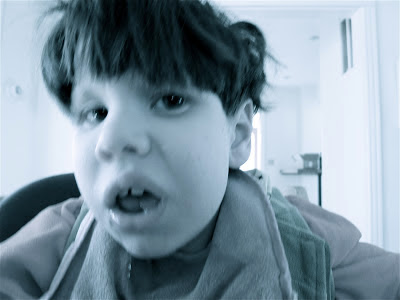