I remember a time when I had to give Calvin medicine twenty-two times every day. Some of his meds he took only once daily, others twice, some were administered three times a day and another I gave him four times every day. Now it's down to seventeen times, including supplements. Nutty.

Clear pink and milky white liquid medicines were—and still are—shaken, syringed, given straight or diluted in water in his sippy cup. Capsules needed to be opened and their white powdery contents sprinkled into Calvin’s yogurt. For a while I had to give him just half of a capsule, which entailed pouring some of the chemical from one tiny half of the open gelatin capsule into the other and eyeball it through the translucent gel until both halves appeared to hold equal amounts. Sometimes the contents would dump out all at once like ice cubes do when slurping the last few drops of beverage out of a cup. Crazy.

Pills were always easier to handle than capsules, though not when I’ve had to cut them into quarters, or even eighths, and you can forget about being precise when the damn things are oval. I’ve made a handy stencil on the back of an old, flaky mirror and cut the tiny pills on the glass using a razor blade. Dubious.

At some point, after Calvin's epilepsy diagnosis and after initiating the Ketogenic diet, Calvin was taking upwards of eight medicines, all with different dosing protocol. I had to devise a check-off chart so that I could account for each drug that I had administered lest I forget which ones he had gotten and which ones he hadn’t. The consequences of forgetting a seizure medicine, or double-dosing it, are equally hairy, though, as far as I know that has never happened on my watch. When first diagnosed with epilepsy and while still in the hospital, Michael and I realized that the adult neurologist on duty had given Calvin twice the dose for his weight—equivalent to an adult dose—of one seizure medicine. Calvin went nuts, screaming and writhing like a maniac. His behavior led us to request the drug literature before his second dose. It exposed the error and we told the doctor (via an intern) who immediately halved the dose though never owned up to the mistake and never showed himself to us though we had requested to see him several times. Wacko.

Now, if we could just discover a cure we could do away with all the nutty, crazy, wacko, dubious world of chemical drugs and their side effects, not to mention the effing seizures.

In honor of Calvin's ninth spin around the sun, please join us in spirit or in person for our 5th anniversary CURE epilepsy benefit by donating what you can to epilepsy research at: http://www.calvinscure.com 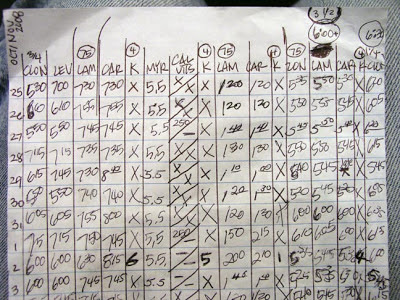