Every now and again, during late-night dinner conversations or huddled in front of a blazing fire, the dialog between friends might traipse off to drugs. We might talk about which ones we've tried—if any—and which ones we haven't. We might discuss the Valium our mothers took, the heroine our friends might have been addicted to, the shrooms we'd passed up at a rave, the cocaine our boyfriends might have abused, the pot we might've smoked to dampen our grief. At times, compelling films like Citizen Ruth, Boogie Nights and Requiem for a Dream might have coaxed us to consider the plight of glue-sniffers, crackheads or meth addicts. Lately, the hubbub has been all about the legalization of recreational marijuana use in Washington and Colorado. I think about my mild yet ignorant regret having not experimented with LSD when I was young and roguish, though, at the time I feared such drugs. But, over the years, I’ve heard several thought-provoking accounts from various writers, philosophers and artists describing their past experience with LSD as having broadened their perceptions, allowed them to see and understand life through an entirely different lens that positively informs their art and the way they approach the world.

Since Calvin’s epilepsy diagnosis I find myself pondering a whole different class of drugs previously unknown to me: the dreaded anticonvulsants. I grieve for my boy who has had to take scores of the powerful, mind-altering chemicals—chalky bitter tablets, vile crystalline powders, acrid tinctures—since he was the tender age of two and before he could walk. Drugs or no drugs, I have to think that Calvin’s mind works differently than mine, that he sees things in a way that I never will. He’s missing a hank of white matter—his brain’s super-highway—and how he gets around, sees and hears the world, no one knows. Do images flit by before his eyes like in a time-lapse video, or do they thicken and clog, the sounds he hears morphing into molasses baritone and bass? Does he experience some form of synesthesia when he stares at the sun—as he’s bent on doing—that produces symphonies in his brain? When mouthing an object of a particular shape or texture does he behold a vivid kaleidoscope? Does his mind interpret images and sounds in the same manner as mine does, or does he swim around in some Alice in Wonderland dreamscape, apparitions floating above his head like clouds or jellyfish? I wonder if patterns, geometry and repetition are, to Calvin, nothing less than sublime beauty.

I’ve heard that in the moments before a seizure its aura can give rise to unusual smells and tastes or flickering lights. In a novel I read a few years before Calvin was born called Lying Awake, by Mark Salzman, an afflicted nun is faced with the weighty decision of undergoing brain surgery to rid her of her seizures. She balks at the notion because it is during those auras, and the seizures themselves, that she feels closest to God, feels as if she were having an epiphany, which for her is pure narcotic and inspires her poetry. The prospect of surgery seems an agonizingly no-win situation for her, whose divine visions would literally be cut out with a knife, perhaps severing her unique relationship with God and spirituality.

I often wish there were some crystal ball that I could use to peer into Calvin’s brain so I could know what he’s thinking, feeling, hearing, seeing. As it is, I can never be sure if his behavior is due to auras, seizures, pain, discomfort or epileptiform discharges. Are his outlandish behaviors drug-induced from withdrawal, toxification, the drugs’ basic gnawing side effects of irritability, nausea, mood swings, visual disturbances, headaches? Or are they simply the result of a growing boy, who can't talk, transitioning through different stages of development? But I have no crystal ball. So the best I can do is to empathize by trying to put myself into his shoes—get into his head. I must imagine myself under the spell of his drugs, which I think would be a pretty crazy, scary, awful trip and one that I’d never wish on anyone or think I’d missed out on as a youth. 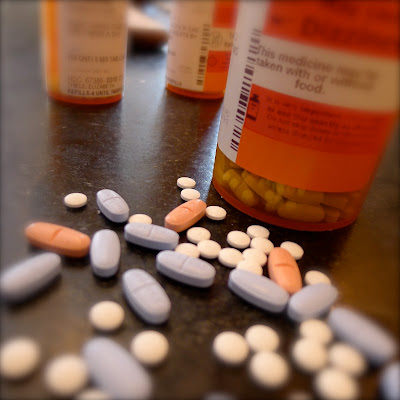