The high-risk pregnancy doctor delivered the news about Calvin’s enlarged ventricles which appeared in a sonogram. She said, “Your baby’s brain’s lateral ventricles are enlarged ... this is something you need to worry about ... it could affect I.Q. ... come back in four weeks.” We never saw her again.

Before he was born the neurologist told us that, due to the enlarged ventricles in Calvin's brain, he might never walk or talk. I didn’t want to believe him.

In Boston, the neonatologists tried to assuage our worry telling us that only five percent of babies born at thirty-five weeks gestation needed help breathing. Calvin was one of them.

In his first week of life the neonatologists told us he had terrible Apgar scores and low muscle tone. Several of them described him as “floppy.”

Calvin spent his first week hooked up to leads in a clear plastic box. He had trouble keeping his temperature up, had dangerously rapid heartbeat and respiration and hadn’t developed the suck-swallow reflex. The lactation consultants each gave me different recommendations. One of them instructed me not to look at Calvin while I nursed because it might distract him. I ignored her advice.

Though it was hard work, after seven weeks Calvin eventually learned how to nurse well enough to bring him home from the hospital. He was barely six pounds at that point. A pediatrician told us not to take him outside in case we “ran into” someone. I was never sure what he meant.

At Calvin's first appointment the neurologist repeated the warning that he might never crawl, walk or talk. I still didn’t want to believe him.

Specialists in Boston and Portland studied the absence of white matter in Calvin's brain, his enlarged ventricles, his blood, his body, his muscle tone, his endocrine system, his vision, his metabolism, his protracted development, his genes. Few have gone the extra mile in considering all of the questions that need to be asked and answered. Many resent mine. I ask them anyway. I press for answers.

An ophthalmologist with a notoriously terrible bedside manner said Calvin's vision was poor, but not bad enough to warrant glasses. Everything about Calvin told me otherwise. Then a specialist in Boston tested his vision at 20/1000—five times worse than what is considered legally blind. He was given a prescription for glasses and immediately began seeing the world in more detail, began seeing us.

None of Calvin's specialists mentioned the possibility of seizures, of epilepsy, though its incidence in cases like Calvin's is quite high. Luckily I had prepared myself.

Not a single specialist suggested trying cannabis to treat Calvin's epilepsy. Instead, they balked at my proposal. I went about it anyway with the help of Calvin's pediatrician. Thankfully, the others have come around, and I admire that a great deal. 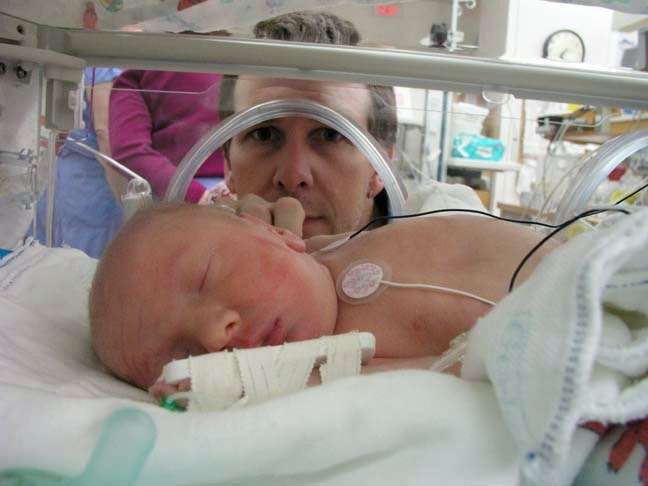