I arrive home, wipe my feet, pet Rudy, and sit down at my computer before heading upstairs to relieve Calvin’s nurse. It’s not quite four o’clock and for a few hours the sun has been melting the drifts and banks of snow that plague our town. Along the roadside the snow looks like decaying cinder block against streets scoured by sand and salt.

After sitting for a bit Calvin’s nurse shouts to me from his bedroom. He’s having a seizure. Within seconds I’m at his bedside as she lowers its safety panel. He’s been napping. His lips are aubergine, his body still, his eyes glass. It's been years since he's had a seizure at this time of day. Today is day thirteen, he’s got a runny nose, the barometric pressure is low and the full moon arrives tomorrow; the perfect storm has arrived.

When the seizure is over, it takes him a while to fall back to sleep; he always sleeps for at least an hour right after one. His blue eyes remain vacant and half-mast, and their blinking and shifting make me wonder if he has slipped back into another one. I ask his nurse to bring me the bottle of cannabis oil. She runs it up and with her help I squeeze three drops into his mouth. As she heads back down the stairs to leave I tell her that I love her, and she smiles knowingly.

I’m keeping vigil as he sleeps. Like a cherub, his lips are carmine, his cheeks chubby and pink and his arms frame his face above his head making him look like a cameo. He rests on a pillowcase printed with a colorful woodcut of the world that Nick gave him. I study the fish and the boat and the gull, all of which I’m fairly certain Calvin has never noticed—not the real ones either. I see the continents I’ve visited knowing Calvin will likely never step foot in them. I note the seas that I have crossed wondering if I’ll ever do so again. I regard the swirling waves that touch his fingers, which twitch like aftershocks in the wash of a quake.

Within minutes of giving Calvin drops of the cannabis oil he is fast asleep. His breathing is regular, his color good. We’ve made it this far, I think, considering what a long, difficult journey it has been, then I wonder if—and hope that—like this winter, we’ve been through the worst of it. At least for now we’re headed in the right direction. 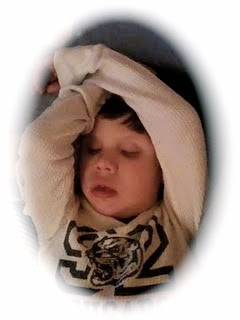 Posted by Christy Shake at 5:14 PM