easy as pie: how to make cannabis oil

If I were to vanish from the earth on any given day—get hit by a bus or by someone texting while driving, take a fall down the stairs, get into a car wreck—I think to myself, how might Calvin survive? It’s not an unwarranted worry of mine because, unlike typical children who could carry on with life after the death of a parent, without harm or peril to their physical selves, if I died, it would take a huge and focused effort for Michael to take over everything medically related to Calvin just to keep him alive and buffered from the specter of life-threatening seizures. He’d have to know Calvin’s every medicine, their doses and time of administration, know how to refill them and get prior authorizations from the insurance companies and know how to make Calvin’s cannabis oils.

So, in the interest of recording my methods in the simplest way for Michael (no, I'm not planning on keeling over anytime soon) and, too, for other parents out there considering making cannabis oils for their children, here’s the nitty-gritty of it all. It’s as easy as pie once you get over the initial intimidation of trying something new:

THCA cannabis oil:
This will give you some idea of what to expect, but I highly recommend you study the original recipe I use before you begin, which is in much more detail and downloadable from Epsilon Apothacaries. I've included several links so you can visualize and/or purchase some of the items you'll need, many of which you can buy at your local hardware or kitchen store.

To give you some idea of concentration, I start with flower that has about 18% THC. When all is said and done, using the recipe above, I get an oil that is between 21 - 26 mg THCA per ml with roughly 1 - 2 mg THC per ml.
CBD cannabis oil:
Procure dried, cured high CBD cannabis flower (I use a strain also from Remedy). The first step is to bake the bud in a mason jar (or two) with a slightly loose though well-thread lid at 240 degrees Fahrenheit for one hour, agitating every 15 minutes. Let cool to room temperature with the lid just finger tight. (In my opinion, this is the most straight forward way to decarboxylate your bud, but not necessarily the optimum method. I recommend researching and asking an expert, but it has worked fine for me.) Then, continue with the same steps as above, starting with step number 2, however ...

In my experience, the high CBD strain yields less medicine, so I add 13 mls of oil to each gram of resin instead of 30 mls, and I come up with a concentration of around 43 mg CBD per ml and about 2 mg THC per ml. I continue to fiddle with the potency. You can test your resin before adding the oil to have better control over the final product, but the labs need a fair amount of resin, which is why I test the end product instead and adjust Calvin's dose accordingly.

For much more detailed and precise instructions, please refer to the original recipe, from Epsilon Apothecaries, which you can download. The entire process takes several days but less than a week.

Tip: to coax the resin to dissolve more quickly into the oil, add 1 ml of oil to the alcohol mixture and shake well just prior to evaporating it in the pan. This will dilute your final resin some, but will make the scraping easier and the dissolving faster. Simply weigh 1 ml of oil so you know how much weight to subtract to get the net weight of pure resin. In my experience, 1 ml of MCT oil, for instance, weighs about 1 gm. For instance, if you add 1 gm of oil to the alcohol mixture and, after it evaporates, you are left with 6 gms of resin substance, subtract 1 gm to account for the oil and your total net resin weight is 5 gms. Make sense?

Disclaimer: I can't be sure you'll end up with what you want or with an oil that will help your child's seizures, but perhaps it's worth a try. Remember, keep things as sterile as possible throughout the process. 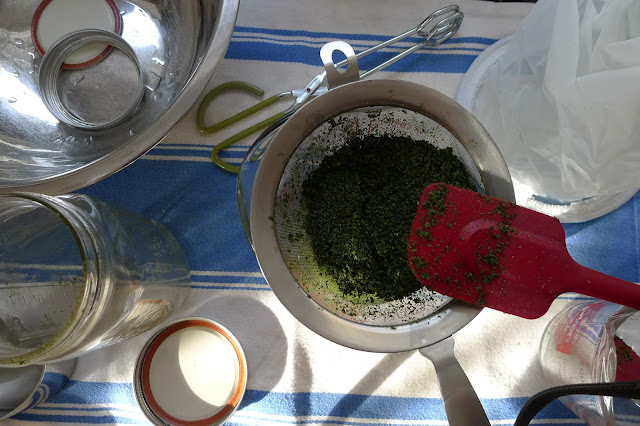 Posted by Christy Shake at 4:28 PM