twelfth turn around the sun

Twelve years ago today, in the middle of an ice storm six weeks before his due date, Calvin came into the world. Two weeks earlier he’d been diagnosed, using sonograms and a fetal MRI, with ventriculomegaly: enlarged lateral ventricles in his brain and a significant absence of its white matter.

After Calvin was born we weren’t sure he’d survive. He spent his first seven weeks in two hospitals stabilizing his vitals and learning how to nurse. It was a stressful time. Michael had to travel thirty-five miles each way between the first hospital, where Calvin spent time in the NICU, and his work, which didn't offer fathers parental leave at the time. The college even asked him to teach an extra class which, for Calvin's and my sake, he thankfully declined. We stayed as close as we could to Calvin, sleeping at the Ronald McDonald house for his first few precarious weeks of life, and then I roomed with Calvin for the remaining weeks at our local hospital before bringing him home. Michael came to hold vigil every day as soon as he could, bringing home-cooked meals, clean clothes and supplies, and on most nights he slept on a makeshift bed in our room. It would be, perhaps, the most trying time of our lives.

Calvin's neurologist told us he might never walk or talk or crawl. No one said that he might also be prone to epilepsy.

Twelve years later Calvin is a wonky walker, but at least he can walk ... and crawl. He can't speak, wears diapers, has poor vision and poor coordination, though he is improving his signs for hug and more and eat and all done. Sadly, though, his epilepsy has eclipsed his other deficits, in large part due to the debilitating drugs used to treat it, which have never worked to get his seizures completely under control despite causing heinous side effects which exacerbate the struggles Calvin already endures.

But we continue to work on improving his quality of life. Over the past two years we have been giving Calvin homemade cannabis oils—THCA and CBD—the first of which appears to have halted his daytime grand mals. The oils have also seemed to have helped him sleep, calmed his body and allowed us to eliminate over ninety percent of his addictive benzodiazepin, clobazam, cousin of Valium, which he's been taking for over five years.

These days Calvin is a pretty happy kid who gets on the bus by himself, goes to school full time, likes to take baths, eats well, sops up our hugs and kisses and has an endless supply of his own. And even though he's a turkey sometimes, we're honored to be his parents and we know, without doubt, he helps make this crazy world go round. 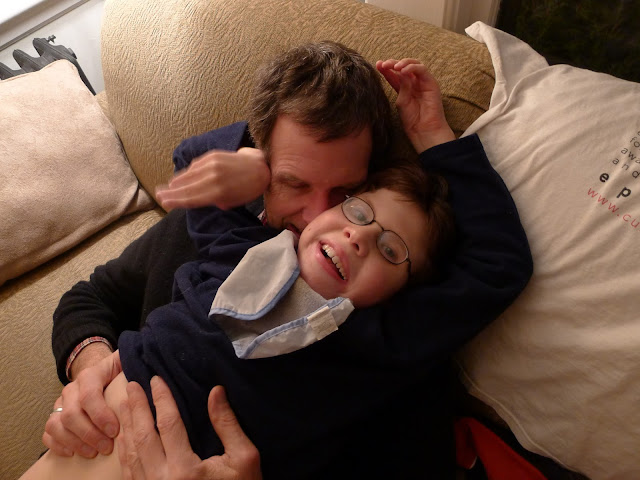 Posted by Christy Shake at 2:05 PM