Today I'll go to visit Calvin's third grade classroom, the one he mainstreams with for less than an hour on most days. The rest of the time he attends the Life Skills classroom with other kids like him who can't manage on their own to do the most basic things.

I get nervous thinking about sitting in front of a class with twenty wide-eyed munchkins peering up at me, Calvin sitting to the side or in back in his one-on-one's lap. The kids ask me questions like:

why does Calvin wear a diaper? what's that harness for? will he ever learn to talk? how come he drools so much? why does he do that thing with his fingers? will he always have epilepsy? how come he makes those noises? why does he flap his arms? can he read? can someone die from epilepsy?

I'll try to explain to them about epilepsy, about the seizures and about the drugs, as best I can without scaring them. I'll try to describe Calvin in a way that they might begin to understand, in a way that will warm them to him.

But as the years pass and the kids get to that age of teasing and name-calling and seeing differences and judging, I worry they'll no longer embrace Calvin as one of their classmates. I worry that they'll start getting those signals from the world, from their peers, from some of their parents, that "other" is something to be feared, something to mistrust, something to keep at arm's length. But I'll keep hoping that the world is changing, keep hoping that I am wrong, and I'll keep trying to help them to simply understand. 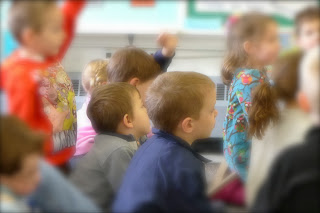