This morning our buddies Elmer and Nicole came by to say hello. They're back in town visiting for a few days. The first thing Elmer did, after giving Michael and I hugs, was to make a beeline toward Calvin to put his arms around our boy. It reminded me of the first time that we met the couple. We were at a mutual friend's birthday party down the street. We'd had to bring Calvin along, who might have been two years old at the time, though I can't remember if he'd been diagnosed with epilepsy yet. In any case, he was a floppy baby, small for his age but big for his developmental stage, legally blind times five, thus sporting tiny Mickey Mouse glasses, and unable to crawl, walk or utter any words—in some ways not unlike he is today.

Shortly after being introduced to us, Elmer asked to hold Calvin. His fearlessness surprised me, his utter lack of apprehension, his plain and simple delight at doing so. He cradled Calvin as if he'd done it a thousand times before. He even rocked him in his arms before nestling him up on his shoulder. Michael and I were astonished and I can remember being touched to tears. Few friends had asked to hold Calvin and none had done so with such ease and grace. Nicole joined Elmer at his side and, with one arm around him, peered lovingly into Calvin's eyes while rubbing his little back. The couple's warmth lit the room for me (I'd lived in the grip of despair for years) and for a few minutes, as they tended to our child, Michael and I were able to partake in the many birthday sweets arranged on a nearby table.

A few hours ago, while sitting at our table sharing a breakfast of homemade blueberry-peach crisp with ice cream, they asked about Calvin, about his recent test for reflux. Nicole offered some ideas for alternative treatments such as apple cider vinegar and bitters before meals. Elmer, holding Calvin once more, enjoyed another brief hug before the little imp squirmed out of his lap, since, because of the seizure meds, he just can't ever seem to stay still.

The couple has recently moved to Milwaukee for Elmer's job. They'd been living in New York for two years, after having gotten married, so that Elmer could attended Columbia Business School. We miss having them close by. But every time they come into town they make an effort to stop by, either together, separately or both. They never fail to ask after Calvin and they lavish us with their affection, their vitality, their contagious optimism, their openness, their sense of humor, their love, and often entire meals brought on big platters including some seriously badass desserts that Nicole creates.

We love you Elmer and Nicole. Until next time. 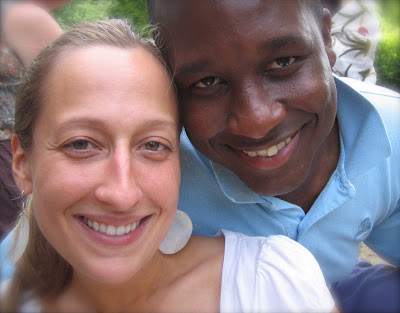 Posted by Christy Shake at 1:02 PM