I've got good news and bad.

Inevitable as it seems, the bad news is that Calvin had a grand mal seizure yesterday morning. The good news is that he only had one, we didn't have to use rectal Valium, he hasn't had any partials in its wake, and he went ten days without any obvious seizures, even in the face of his most recent benzodiazepine wean. This last morsel is really good news considering the step down he just took was twice as big of a decrease as we've been doing for months. Having said that, the decrease is still tiny—only about eight percent of his current dose, or just 0.25 mgs divided into two doses. We decided to try a larger decrease in exchange for a longer pause between titrations, thinking it might give Calvin more time for his brain and body to adjust to less medicine. It also gives my brain a break from obsessing about the next wean since it isn't scheduled until next month. If we can remain at this new rate—which is totally unclear and depends upon how he responds—Calvin will be completely off of his clobazam by October 2017. At that point, his wean will have lasted three-and-a-half years.

Due to the nature of benzodiazepines and their withdrawal, we can expect to see withdrawal symptoms linger, possibly for months, after Calvin's final dose. We hope that none of them will be permanent. We hope, too, that Calvin's seizures will level off or possibly even decrease.

Having already taken our son off of over ninety percent of his benzodiazepine, I have begun seeing a better Calvin emerge. I see him drool less, walk steadier and, generally, sleep better. He is far calmer than he was even six months ago. He does continue to have sporadic manic and hysterical episodes, but we hope that these will subside with time as we believe some of them might be connected to some sort of gut pain or discomfort which can be brought on, or exacerbated, by benzodiazepines and their withdrawal.

We continue to give Calvin Keppra and a homemade THCA cannabis oil, made with flower from our amazing local dispensary, Remedy Compassion Center, plus a CBD cannabis oil called Haleigh's Hope, which appears to have helped numerous children battle their seizures, as evidenced by scores of parent testimonials on social media. We believe the Haleigh's Hope, in concert with the THCA oil, has helped Calvin withstand a protracted benzodiazepine withdrawal, during puberty no less.

The good news, too, is that today Calvin is back in school again having had no apparent partial seizures after the grand mal. His foot is healing nicely after having broken it this summer. Beth, his longtime nurse, is back in town for a few weeks and will be helping us out a bit. Autumn is in the air and from what I can tell, the fall foliage is going to be electric this year. And, on the equinox Michael and I celebrate fourteen years of marriage, to which he'll jest, "Seems like so much longer."

So I guess, at least for now, most of the news is good. 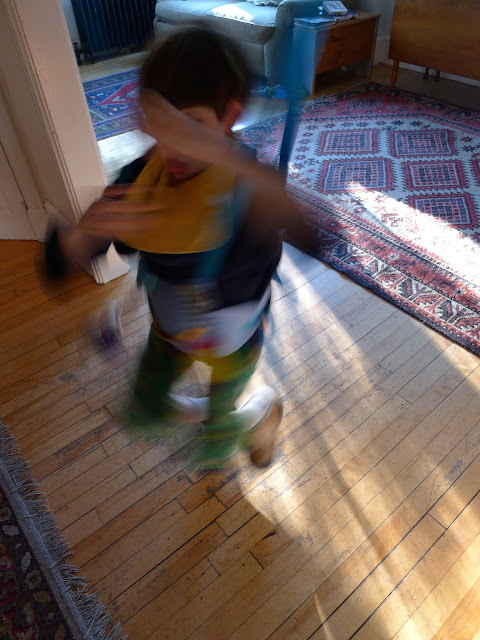 Posted by Christy Shake at 9:41 AM