Though long ago Michael and I both lost our religion, we still enjoy some of the secular traditions that seem to have been hard-wired into us from childhood. I still like stringing up lights, wrapping a gift or two (one being the exact number I have wrapped this year) listening to a tiny dose—though no more—of holiday music, watching holiday films, donating to several charities and other worthy causes, eating Michael's special meal on Christmas Eve and another one, with guests, on Christmas Day. What I haven't done in several years is to adorn a tree. The joy that decorating used to bring has been lost since it became clear, years ago, that Calvin would not grasp or delight in any of the secular Christmas traditions, including trimming a tree.

For a few years after his birth, every December I'd take boxes from the basement, opening egg cartons and smaller parcels filled with delicate ornaments wrapped in tissue and newspaper. I strung what I call Charlie Brown trees with tiny white lights. The twinkling trees were beautiful, but there was a sadness and hollowness in their making, due directly to the loss of what I had hoped would be a mentally, and therefore physically, healthy child who would help me light and trim the trees. The boxes have remained undisturbed under the stairs to the basement for years.

Today I read an opinion piece titled, When a Grieving Mother Talks, Listen. And though the piece deals with perinatal deaths—stillbirths and babies who die in their first week of life—I can begin to understand the loss while remembering several dear friends and loved ones who have suffered the grief of losing a child at birth. Perhaps in a slightly similar way to those who lose infants, since Calvin's difficult birth and life almost nothing that was familiar about celebrations like Christmas or birthdays feels familiar anymore, and nothing can really fill the void that lost joy carves out of a soul.

We don't get to delight in our child climbing into bed with us on Christmas morn, don't get to see his excitement over Santa's arrival, don't get to relish in making Christmas cookies with him, or witness him tasting eggnog for the first time, don't see him unpeel gifts, play with new toys, read holiday stories, make snowmen, trim the tree.

Though, like I've said before, we aren't Christian, and we don't buy into the commercialism of Christmas, we'd still likely participate in some of Christmas's pageant if not for our disabled, chronically ill child—I mean, Jesus's existence is still something worthy to celebrate seeing as though he was such a cool guy, someone who fed the hungry, helped the poor, healed the sick, didn't judge, loved the most vulnerable, including wayward souls. And though we enjoy receiving greeting cards in the mail from friends near and far, I still feel a pang of sorrow when I open them. Even so, something inside me wants to continue getting them; I find I live vicariously through my lovely friends whose kids are normal, and who delight in normal things. Please don't stop sending them.

And in case you are wondering, we just finished drinking a batch of Michael's great-grandmother's eggnog recipe that has just the right amount of bourbon topped with a cloud of whipped egg white. I'm having a hot flash right now, which somehow feels luxurious. Our friend Lauren just left after a nice visit having played with Calvin in a way no one else does. Calvin is hunkering down in his bed with Michael, squirming around, putting his hands down the neck of Michael's sweater, cooing like a happy baby as he sometimes does, fingering Michael's ear and mouth. Soon we'll be eating an herb-encrusted rack of lamb, a white bean puree, steamed asparagus and pecan pie. Tomorrow night we'll have a pork crown roast, celeriac and potato mash, roasted Brussels sprouts, salad and bouche de noel. To that I can be most grateful and say a secular amen. 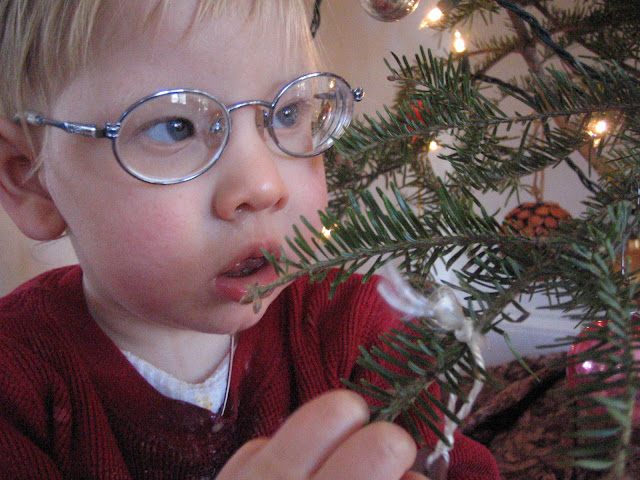 Posted by Christy Shake at 6:57 PM