Yesterday we were graced with a picture perfect Christmas, as much as could be possible I suppose, given our disabled, chronically ill child. Calvin did not wake to a seizure, and he had a good morning while we ate cinnamon toast, drank strong coffee and opened the gifts Michael's parents had sent. Michael surprised me by installing eight black-out shades in several of our southerly windows so that I no longer have to struggle with an oversized, floppy piece of cardboard trying to block Calvin's obsessive and incessant efforts to stare directly into the sun. Why we didn't do this ages ago, I don't know.

Calvin's new nurse Rita, who is a glowing gift of kindness, candor, reliability, sanity, humor, professionalism, compassion, punctuality and spunk, was able to take care of Calvin for a few hours which freed us up to walk the dog together—a rare occasion—albeit in driving winds and snow. On the way home from the fields we were ushered into Woody's home—three doors down—by his son Mark who, when he saw us walking past, flagged us in from the cold. Upon shedding our snowy hats, scarves, boots and coats, Woody's son-in-law whipped up a couple of Bloody Marys then, in the living room, we joined the extended family of ten who, at the last minute, had descended on Woody's home due to complications from the storm.

The cocktails and camaraderie warmed our souls, as did the fire in the wood stove back at home. Before Rita left I had just enough time to shovel the driveway and make a batch of chocolate chip cookies while Michael got to work on the crown roast, gravy, mashed celeriac and potatoes, Brussels sprouts, and another batch of bourbon eggnog. Outside, the snow continued to fall.

Shortly after night fell, surprisingly Calvin drifted off to sleep immediately after a semi-agitated afternoon; I sense him ramping up to his next seizure which I think is going to happen soon. Guests arrived—two old friends and two new ones. Eggnog was imbibed. Candles were lit. Music ensued. Pork chops and mashers were dribbled in gravy, sprouts were roasted and tossed in Parmesan. All, including a delightfully light salad, were happily noshed. Two Bouche de Noels—one vanilla, one chocolate—were debated on their merits then quickly, though not completely, devoured. Various artists, paintings, forthcoming photo projects, the #metoo movement, and the opioid crisis were rigorously explored. Russ and Susan's absence at this year's table was palpable and deeply mourned.

It was as decent of a Christmas as we, in our life of relative confinement, could hope for or expect, and Santa didn't deliver any lumps of coal. 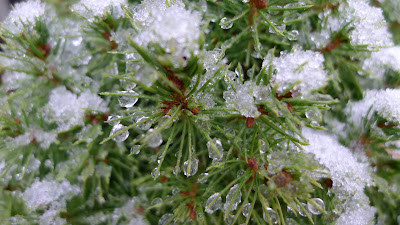 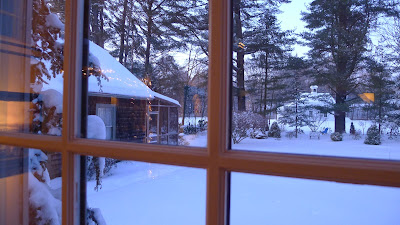 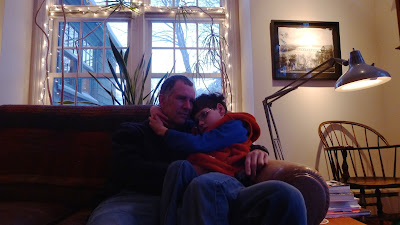 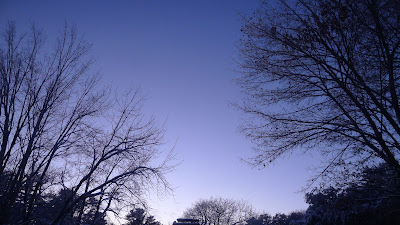 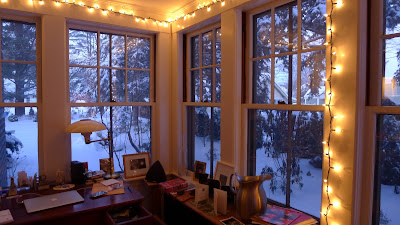 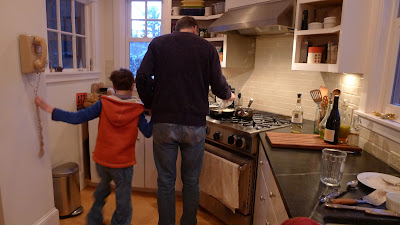 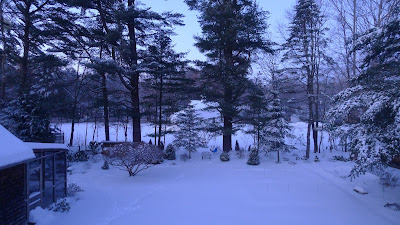 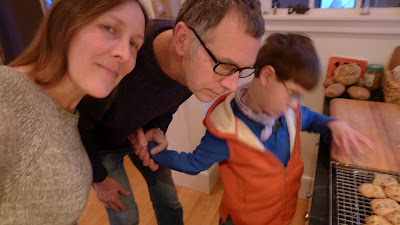 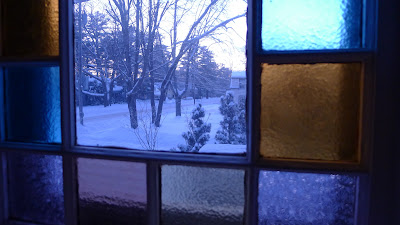