Just as the season's first heavy snowfall was putting down its inches, a dozen or more of my husband's college photography students crowded into Calvin's room. They'd come over for dinner after their last gathering of the semester to eat shepherd's pies Michael had prepared earlier that afternoon. As they filed in, I introduced myself, trying my best to remember their names as I did. One of the kids (I call them kids though they are really young adults) asked if Calvin was still awake. I told him yes, and invited him and any others who might like to meet their professor's son to come upstairs before I gave Calvin his nighttime meds and tucked him in.

To my surprise, the entire group followed me up and into Calvin's room where my boy was laying on his back, safely secured under the netted canopy of his bed, chewing on a sock and playing with his toes. When I unhooked and threw back the netting, he sat up then knelt to help me lift him out and onto the changing table. I told him that some friends had come to greet him, then put on his glasses so he might better see them.

"Hi Calvin!" a few of them said. I took Calvin's hand and helped him wave back at them.

One of the students told me that they'd seen photographs of Calvin that Michael had taken, and that he had also read my blog. All of them were sweet to my boy and seemingly comfortable in the presence of our peculiar kid who, unless one is within arm's reach of him, will not acknowledge their existence.

When the gang retreated, I changed Calvin's diaper, tossed him into bed and kissed him goodnight. He went right to sleep and didn't make a peep all evening.

Downstairs, the kids filled their bellies with curried shepherd's pie for eighteen, salad, and brownies a la mode. They finished with a Yankee swap of their photos, which I thought were all quite good.

Having the kids over, something Michael does with both of his classes at the end of every semester, is often bittersweet depending upon my mood. Last night, when they were setting out into the snowy cold, I was a bit misty eyed as a few of the young men and one young woman offered me hugs. As I bid them farewell, a pang of sorrow shot through me, knowing Calvin will never fill the void—the promise, or so I thought—that parenthood had once held: talking with my boy about the workings of the world, seeing him play games with friends, reading his written words, knowing some of his thoughts, meeting his sweethearts, helping him achieve his dreams, perhaps sending him off to college or traveling with him to distant places in the world.

This morning at four, when the snow had stopped and the air was cold and still, Calvin suffered his first partial complex seizure in thirty days, the longest stint between them in over a year. He made it nine days between grand mals, which isn't horrible considering he is taking almost zero benzodiazepine and far less CBD oil than he was a few months ago. As the day has worn on, though, the seizures keep coming. He's had five thus far; the THCA isn't keeping them at bay, perhaps because he has a low-grade fever, so I gave him a bit of THC rescue tincture to see what it can do.

For now, he is back in his bed and resting with the net pulled over. Michael is downstairs making another curried shepherd's pie for tonight's second class of students who are coming over. I'm sitting on Calvin's changing table trying not to despair about so many seizures within just one day ruining what had started off as a decent month in terms of numbers. And, I'm thinking of those nice kids who, if only for a moment, gave me a piece of what my heart is sorely missing. 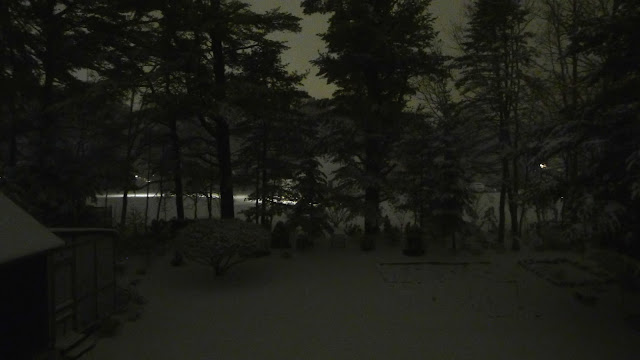 Posted by Christy Shake at 4:00 PM