One evening, when I was seventeen, I entered a dark theater with a group of my best buddies. A warm waft of buttered popcorn trailed us to our seats. Handful by handful the salty puffs dissolved on our tongues, our large eyes affixed to the big screen devouring the new spoof Airplane! From the very first scene I laughed until I wept, practically wetting my pants and leaving the theatre with a terrible, humorous side ache. To present, I have probably seen the movie twenty times and it has become a kind of a cure-all for the blues.

Another narrative—though tragic rather than comic—is about my seven-year-old son Calvin. When he was just two he was diagnosed with epilepsy. After over a year of several failed antiepileptic drugs, while Calvin suffered continually increasing seizures, I decided to pursue alternative forms of treatment. Early on in my research of epilepsy I had discovered the Ketogenic diet. Calvin’s neurologist had never discussed it with us but I had gleaned information about it from The Charlie Foundation website. Although the diet purported to be quite challenging I knew we had to give it a try, but I wasn’t sure who to trust or where to take Calvin for this rigorous treatment.

In my quest for the answer I began a brief email, “Dear Charlie Foundation,” figuring someone there could guide me in making my decision. I was aware that Jim Abrahams, writer, director and producer of one of my all-time favorite film comedies Airplane! had started the foundation in honor of his son Charlie whose epilepsy was cured by the diet. I completed my message and tapped the “send” button, doubtful I’d get any reply, then made my way to the grocer.

When I returned home, large sacks of provisions in my arms, my husband said, “Jim Abrahams called. He wants you to call him back.” I nearly dropped the bags. I was stunned, but still somehow able to dial the number. A modest voice answered the phone at The Charlie Foundation. It was Jim. We spoke at length about Calvin and the obstacles he’d met since he had begun having seizures. Jim’s voice was calm and soothing, his words more so. Speaking with him was like talking to an old friend, his genuine concern shined through from three thousand miles away. He gave me his best advice as to which neurologist should monitor Calvin during the diet, and he was right. Calvin has never been better cared for than by the neurology team Jim Abrahams recommended to us, besides, of course, his pediatrician.

Our correspondence continued over the next weeks, months and years, though sporadically. Primarily, we communicated via email and I’d often attach a photo or two of Calvin and me, which Jim always warmly complimented.

Finally, after a trip to visit my mother in San Diego, I hopped a train to Los Angeles to meet Jim for the first time. He pulled up to the curb, where I was waiting, in his cool little electric car. As he stepped out we recognized each other instantly from photographs we’d seen. Our embrace was warm and long, as if we’d known each other for decades. To me, it was like meeting kin.

Though we still correspond I haven’t seen my friend face to face since our initial meeting, but I think of him often and fondly—so fondly. His words for me are sincere, candid and compassionate. When I hear his voice I don’t feel alone. His example is a gift that has shaped and inspired me to speak up, and loudly. This witty man of film, who has tickled the funny bone of hundreds of millions of popcorn-popping movie goers, has profoundly and forever impacted the world of children with epilepsy.

Thank you, Jim. We love you dearly. 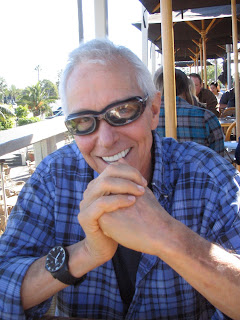