Some folks might think I am paranoid about the common cold. Truth is they are right. Illness—be it pneumonia, flu or a simple virus—lowers seizure threshold and, thus, triggers seizures. For the past several days Calvin has been bothered by two ear infections and a cold but hasn't had any seizures—until today.

I am writing this on my friends' computer. Calvin and I escaped to their idyllic farmhouse refuge while insulation was being foamed into the walls of our home. Calvin is sleeping on their large, soft couch after having just had a two-minute seizure while napping next to me.

After playing with toys in his portable crib we snuggled together for a mid-morning nap. Just as he dozed off I noticed his irregular breathing, so I gave him more air, opening a space between the lofty coverlet and his congested nose. Suddenly his breathing stopped, he became rigid, trembling. A blue cast spread over his fingers and face as he let out a macabre cry that I know all too well. "It's almost done, Calvin," I always say, caressing him, even if I know that it's not.

The other night a friend had joined me at home for dinner while Michael was away at a workshop. She had mentioned that her kids were sick and I had told her that Calvin was too. When I greeted her we hugged and I said "no kisses" to avoid getting her kids' illness in the event it was a different strain than what Calvin had and knowing that illness and contagion often precede symptoms by days. When she reached for my glass to pour me some wine I swiftly intercepted her so she didn't touch it. I felt slightly awkward about my paranoid behavior and felt I must explain further—that it was because her kids were sick. “So is Calvin,” she said. “When your kids get sick” I replied “they just get sick; when Calvin gets sick he gets seizures.” Knowing she is acutely aware and sympathetic to our circumstances with Calvin, I trust she understood my frankness.

I do go to lengths to prevent Calvin from getting sick. I wash my hands copiously, sneeze and cough into my elbow and avoid physical contact with those who are sick or whose children are sick. I have seen Calvin have back-to-back viruses for eight weeks straight, causing numerous seizures. Seizures are difficult if not impossible to prevent, but I'll be damned if there isn’t something I can do to save him from even one. Perhaps I’ll risk offending friends who have a cough. Maybe I’ll insult a nurse who I see hasn’t washed her hands before feeding Calvin. But whomever I might rub the wrong way as a result of my caution and directness likely hasn’t seen their kid suffer hundreds of senseless seizures or is simply ignorant to the misery they cause.

Please share Calvin's story with others. Bring us one step closer to a cure for epilepsy. It's not hard, just do it one story at a time. 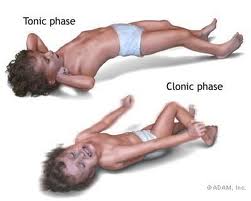