At five this morning Calvin awoke coughing and whining. He’s got two ear infections to deal with, plus some potent antibiotic and his usual regimen of antiepileptic drugs that often appear to cause him headaches. I took him into bed with me, Michael still away at a photo workshop.

Most mornings, when Calvin wakes—and he wakes early—he is too ramped up to go back to sleep and I’m too exhausted to get up. So he spends the next half-hour or so rubbing his head in his hands or thwacking it on the end of the crib. Yesterday, the entire top of his head was a literal nest, all kinky and puffed up like the inside of a fiberfill pillow, and I half expected to see some sort of critter taking refuge in it.

In bed, Calvin wrapped his arms around my neck wanting hugs and kisses. I showered him with them like I always do—ears, cheeks, shoulders, neck, nose, eyes—and he squeals with delight. He seems to like the weight of my arm on his curled up legs and my heavy hand on his hip, his feet wedged under my side. We caress each others warm backs with soft hands. Then he shoves his thumb in his mouth—my forehead to his—and we both fall asleep, his arm still draped around my neck. It’s one of the best feelings in the world—though rare these days—to doze and dream and wake in the warm embrace of his little loving arms. 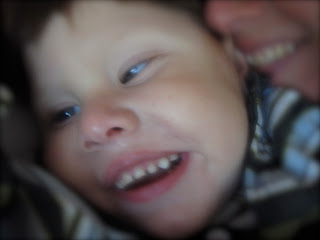