Alas, March in Maine. The other day it was seven degrees and windy with three to five feet of snow still on the ground, piled white and pristine in the backyard with sooty, crusted banks fringing the roadside. Pitted sheer-ice sidewalks, embossed inch deep with boot prints and scarred by craggy ruts, are just beginning to reveal grass, matted yellow and muddy, as the days slowly warm and then freeze again at night.

As a kid my town enjoyed little snow compared with the hammering we get in the northeast. But it used to get cold enough for my dad to water down his hand-poured cement basketball court and transform it into a makeshift hockey rink.

Not far from our home idyllic Lang’s Pond rested in a hollow surrounded by grassy hillsides. The waterhole was small and in the spring edged with hundreds of polliwogs that weeks later lost their tails and became thin-skinned slimy frogs. Digging my feet into thick silken mud oozing between my toes I’d sit at the water’s edge with my jeans rolled up playing with sticks, throwing pebbles and trying to capture frogs. In a favorite hideaway, the luxurious shade of a large weeping willow leaning heavily over the pond, its graceful tips lightly brushing the glassy surface, cooled me as tall grasses obscured my presence.

In the winter when the pond froze over my mom and dad would pack us into the truck, our scuffed-up skates tied together by long ratty laces and draped lazily, clanking, over our shoulders. Our hot breaths puffed into the frigid air, beads of moisture coating the windows in a thin bubbly gray haze, the heaviest drops tracing wavy vertical stripes on the glass. I’d make smiley faces with my finger and they'd begin to cry.

Out on the pond six or eight excited kids skated circles and loops, picked sharp stops into the thick milky frozen slab. "C'mon mom" we'd shout, and she'd give it a try as we formed a happy circle around her, the ice groaning and creaking below the weight of us. I was afraid she might break through; I think she was too. The hollow thud and crack of clashing hockey sticks echoed eerily into the pond’s murky depths, the sound dampened by a low gray sky and a blanketing of snow.

After skating my dad took the older kids hooky-bobbing, traveling slowly down a desolate ice-sheathed neighborhood street, several teenagers hanging like parasites off of the truck’s low back bumper, boots scraping tracks into the dusted ice, the kids' tin laughter ringing and tumbling behind them down the lane.

Winters now are mostly spent indoors. Calvin cannot walk in snow or on ice and chills quickly from his lack of activity and poor circulation. He seems oblivious to the snow and grimaces at the cold, so we stay out of the elements. Perhaps one day, if we can reduce his seizure drugs or—better yet—stop them all together, his balance will improve well enough for us to go outside and play in the snow as it falls quietly in the still frozen air. 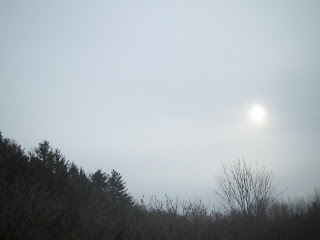