When I reached up to help Calvin descend the steps of the bus yesterday, I knew—his foamy drool an omen of things to come. It was a full-moon day, and Calvin was no doubt on his way to having his next grand mal, something he suffers with too much regularity, about every seven days or so. The daily journal I keep was crowded with scribbly ink stars, one preceding every harbinger—restless night, stomping, not drinking, refusing food, red dots on nose and cheeks, rashy chin, bad butt rash, foamy drool, pacing, sun searching and staring, unusual vocalizations, stubbornness, agitation, not pooping even with use of a suppository, warm skin, "crab claw" fingering, which means his crooked arms are up in front of his face while he snaps and rubs his fingers together wildly.

The seizure finally arrived at 4:50 a.m. It was typical, his body's convulsions lasting about ninety seconds or so. I dabbed lavender oil on the pillow under his nose and rubbed some on his feet and big toes while Michael caressed him and spoke to him lovingly, coaching him out of the fit. When it was over, I gave Calvin a dose of THCA cannabis oil to prevent a subsequent seizure from happening. He fell asleep and woke forty-five minutes later rubbing his head in his hands, so I gave him his Keppra and an ibuprofen in case he had a headache.

He hasn't gotten back to normal yet—whatever that means, because our kid is far from normal—so I've kept him home from school again. Today was Calvin's seventh grand mal in a month's time. Had it happened yesterday it would have been his eighth. Had it not been for the fact that he suffered three grand mals within sixteen hours last week, he might have gotten through this calendar month with only five grand mals and two partial complex ones. Still, if he can get to Friday without having any more seizures, he'll tie last month for the fewest since January: nine (too many). The good news is that he is having very few partial seizures. The bad news is that it almost appears as if some of his partial seizures are manifesting as grand mals.

Last night after we put Calvin to bed, he remained restless, which is typical the night or two before a seizure. The temperature was still in the low-eighties, an unusually hot day for May in Maine, and the house was warm so we put Calvin to bed wearing just a t-shirt and diaper. When Michael went back upstairs to lay him down again (Calvin had sat up and was banging his head against the bed panel) he covered only Calvin's legs thinking he might be too warm. Then Calvin did something we've never seen him do before: he reached down, grabbed his comforter and pulled it up, covering himself. Michael said the act was no doubt deliberate.

While I relish hearing and knowing that Calvin is still progressing—albeit so slowly as to be nearly imperceptible—I'm haunted by the reliability of his seizures and their vicious cycle. I wish I knew, for example, if his rash is truly a symptom of an impending seizure, or if rash and its source is the cause. I feel like if I knew what was causing these weekly flareups then perhaps I could figure out how to thwart them.

I'm hoping to try Calvin on a CBDA oil soon. If that doesn't work, I may try making a CBDA/THCA oil using a strain called Harlequin. Not sure what else to do. Right now, he's showing many of the same harbingers as yesterday. I can smell his seizure breath. He's poking his eye and is uber restless. Again, I'm seeing stars. 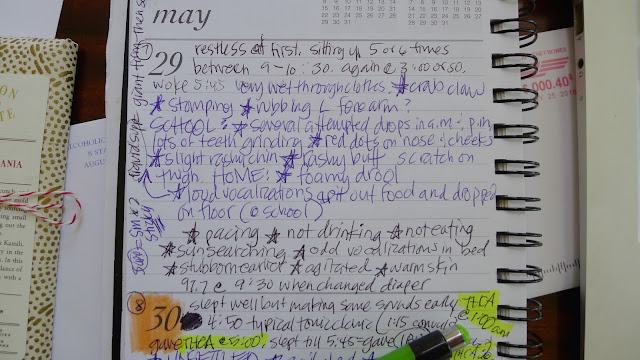