Again, I find myself crossing fingers and knocking on wood, holding onto hope that the Palmetto Harmony CBD cannabis oil we started giving Calvin last June will begin to better thwart Calvin's fits if we can just find the right dose.

After first starting the Palmetto Harmony in June after a different CBD oil had failed, Calvin went forty days without any grand mals, though did suffer a handful or more of complex partial ones. After a breakthrough grand mal, however, he never regained the same seizure freedom. We tried a CBD reboot—something some parents swear by—but had no luck. In part because of the feeling in my gut, I've continued to slowly titrate Calvin's dose upward.

The forty-day stint was evidence to me that the Palmetto Harmony held promise. We had only once before seen Calvin go that long without a grand mal, and that was when he was taking high doses of three antiepileptic drugs which wreaked havoc on his behavior. But I wanted to get a sense of what a therapeutic dose of CBD might look like, since there is really no consensus. So, I made some queries on social media, and I wrote to Charlotte Figi's mom (of Charlotte's Web fame), hoping to find out. What I learned astonished me: some children Calvin's size (sixty pounds) are seizure free on as little as fifteen milligrams of CBD oil while others take several hundred each day. The wide range might be due to the method of extraction, the kind of cannabis strains used in the oils, the type of epilepsy being treated, and the pharmaceuticals on board. In any case, I felt validated to increase Calvin's CBD oil beyond twenty daily milligrams considering he has always needed high doses of pharmaceuticals for them to be at all effective.

Today, Calvin is taking sixty milligrams of CBD oil divided into two doses—one milligram per pound of his weight. Charlotte Figi, who weighs the same, is taking nearly three times that amount and is close to being seizure free. So far, at the slightly higher doses, Calvin has enjoyed over three weeks with only one, brief, subtle event that may or may not have been a complex partial seizure, plus two grand mals, which is slightly fewer grand mals than his average for this length of time. As we have increased his CBD dose, he has seemed generally calmer, steadier, more compliant, and might be sleeping better. The most evident benefit I have noticed, however, is the speed in which he recovers from grand mals. He bounces back within hours, has been able to go to school the same day, and hasn't had any partial complex seizures in the ensuing hours and days like he usually does.

For this I am grateful, but I'll continue crossing fingers and knocking on wood, because I know how epilepsy rolls. 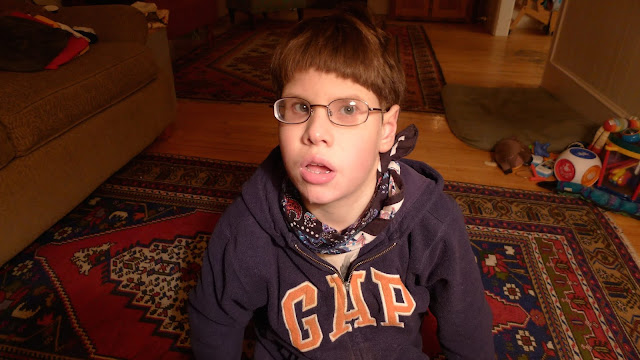 Posted by Christy Shake at 1:15 PM